It may be too soon to hail Everton's 3-0 victory over Arsenal as a changing of the guard, but one thing it does do is put the Gunners' proud Champions League status in serious doubt.

For 16 successive years Arsene Wenger's side have taken their place alongside Europe's elite, but this season there is a new kid on the block.

And Everton could easily be the new Arsenal in more ways than one.

Their Champions League challenge got all the more real after strikes from Steven Naismith, Romelu Lukaku and a Mikel Arteta own goal put them just a point behind the Londoners with a match in hand.

The way they played their visitors off the park was an example of manager Roberto Martinez's passing game in full effect and was reminiscent of the lessons Wenger's side used to hand out to opponents.

Arsenal's soft underbelly was brilliantly exploited at Goodison Park as Everton were tenacious, incisive and just plainly better in every department.

That two of those players are only on loan is a debate for another day. After this performance it is difficult not to talk up Everton's chances of qualifying for the Champions League for only the second time in their history.

It was difficult to argue with Martinez's tactics, which saw him switch to 4-3-3 with Lukaku unusually stationed on the right wing to target Nacho Monreal, who was replacing injured left-back Kieran Gibbs.

However, even the best managers need a stroke of luck.

Leon Osman, who had looped Everton's first shot of the match just past Wojciech Szczesny's left-hand post, got in a tangle with Bacary Sagna, resulting in a gash that opened up after appearing to catch a boot in the face.

It forced Osman's immediate exit down the tunnel after just nine minutes, but brought Barkley to the fore in a more disciplined role on the left than he has been used to playing under Martinez.

However, with Barry providing support behind, the 20-year-old was still able to express himself and was instantly installed as the focal point of Everton's attacking play.

The goal, however, came from Arsenal's inability - or unwillingness - to engage opponents.

Leighton Baines was allowed to carry the ball 30 yards into enemy territory unchallenged and with that amount of time he picked out Lukaku with a low cross.

Although the Belgium striker was denied by Szczesny, Naismith - who seems to have become Martinez's lucky charm - was in the right place at the right time to ram home the rebound.

One Barkley through-ball caused panic in Arsenal's defence but Kevin Mirallas could only shoot weakly while another sent Baines away down the left to create a chance for James McCarthy.

Martinez's ploy to expose Monreal down the other flank led to the Gunners defender giving up the chase with Lukaku, and made Szczesny race out of his area and clear.

Barkley continued to torment the visitors and after numerous step-overs hit an angled shot that was kept out by the goalkeeper's legs, with Mirallas also forcing a save near down at the same right-hand post.

Arsenal were cut open again just after the half-hour when Everton sliced their way through central midfield, with Naismith and Mirallas combining to release Lukaku on the right.

Again Monreal, Thomas Vermaelen and Per Mertesacker stood off as he cut inside and the striker took full advantage to smash home left-footed. 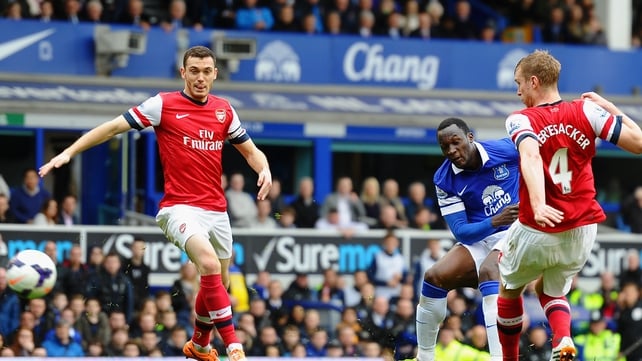 Lukaku's celebration with Martinez on the touchline spoke volumes about the way the players have so wholeheartedly embraced the Spaniard's change in philosophy since replacing David Moyes in the summer.

The closest Arsenal came to a first-half reply saw Howard superbly tip over Lukas Podolski's dipping half-volley, but there was little else to enthuse over.

Everton, on the other hand, were rampant and midway through the second half applied the killer blow.

Mirallas broke from deep and although Szczesny just got to the ball before Naismith, it rebounded back in front of goal where former Toffees midfielder Arteta, under pressure from Mirallas, turned it into his own net.

Yaya Sanogo perhaps had some reason to complain when his late strike was ruled offside, but overall the scoreline was a fair reflection of a game in which Everton showed more invention, passion and hunger than an Arsenal side that looked hapless and without a plan. 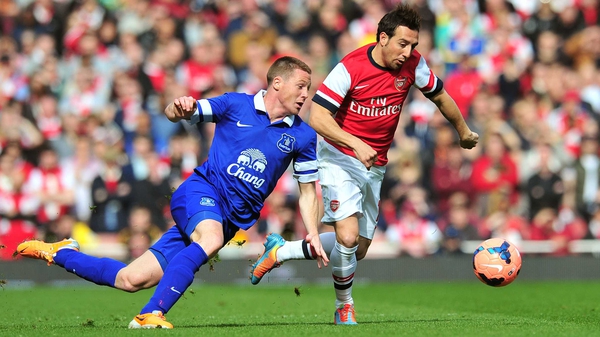