Lionel Messi scored his third penalty in six days to give Barcelona a 1-0 win at local rivals Espanyol and boost their chances of retaining the Primera Division title.

With 14 minutes remaining of a difficult afternoon for Gerardo Martino's side, the prolific Argentina forward calmly sent his spot-kick the other side of Espanyol goalkeeper Kiko Casilla, who was then sent off for handling another shot from Messi outside his area.

Defender Javi Lopez, who had given away the penalty, went in goal for the remaining eight minutes, but Barca were unable to take further advantage.

Meanwhile, Atletico Madrid remain top after coming from a goal behind to pull off a hard-fought 2-1 win at Athletic Bilbao, who finished the game with 10 men when Aymeric Laporte was sent off late on.

Iker Muniain put the Basques ahead with just five minutes played but Diego Costa pulled Diego Simeone's side level midway through the first half, and Koke dived in to head in the winner in the second half, allowing Atletico to preserve their one-point lead over Barcelona at the top of the table.

The result means that Atletico become just the second team to do the double on Athletic, as well as being responsible for two of the three times the Basques have lost at their new stadium San Mames Barria, adding to their 2-1 win in the Copa del Rey quarter finals in January.

Real Madrid kept up the pressure with a 5-0 win over Rayo Vallecano.

Cristiano Ronaldo's goal gave third-placed Madrid a 1-0 lead at the break before goals from Daniel Carvajal, Gareth Bale (2) and Alvaro Morata in the second half put the result beyond doubt. 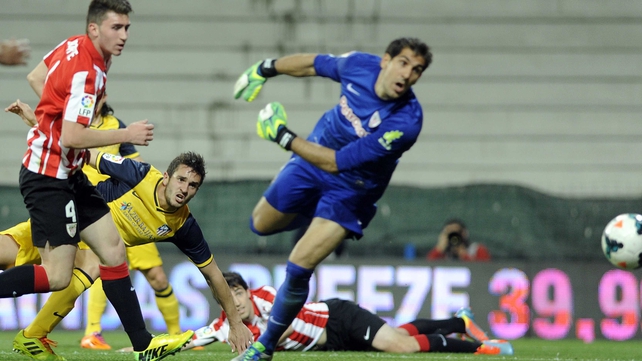 The first half in Estadi Cornellà-El Prat was played at a blistering pace and saw plenty of decent chances for both sides.

The first fell to Neymar, who headed into the arms of Casilla with four minutes gone, but just 60 seconds later Espanyol fired their first warning with Sergio Garcia shooting just wide of Jose Manuel Pinto's near post from 20 yards.

Messi then headed just over the bar from inside the area, while at the other end Pizzi attempted to lift the ball over a defender's head and then go for goal, but could only get the first part right, ballooning over the bar when it came to shoot.

The Portuguese later blazed over from inside the area after getting on the end of a low pass by Garcia as Espanyol launched a lightning-quick break, a moment after Neymar had slid in to meet a Dani Alves cross, but could not keep his effort under the bar either. 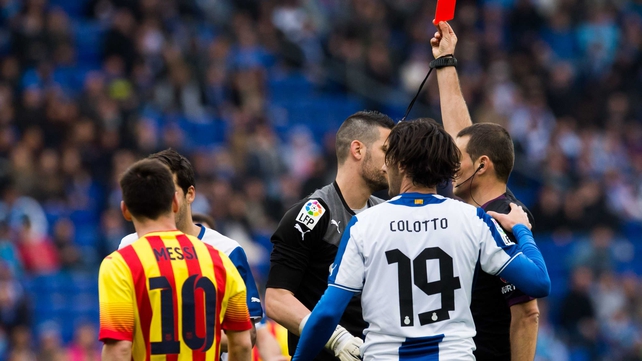 Espanyol then appealed for penalty when Javier Mascherano put his hand across Lopez's face, but it went unnoticed by the referee.

Barca then thought they should have been awarded a spot-kick when Pedro was felled in the area 11 minutes into the second half. Pedro later headed into the arms of Casilla from a corner - one of few chances from either side in a second period that was far more tranquil than the first.

Espanyol showed far less energy than at the start of the game, and the withdrawal of the lively albeit ineffectual Pizzi for Alex Fernandez seemed to be a signal they would be content with a draw.

A point would not do for title-chasing Barca, and they attacked with more urgency.

Cesc Fabregas and Messi combined well but were blocked by the Espanyol defence, then Gerard Pique's header from a corner hit the bar.

Then the perfect opportunity to take the lead arrived, however - a penalty awarded for a handball against Lopez. Espanyol fiercely contested the decision, but Messi sent Casilla the wrong way to break the deadlock.

The goalkeeper managed to deny Messi soon after, but did so illegally and was sent off for handling the ball outside of his area.

Lopez did well in the unfamiliar role of goalkeeper, denying Alexis Sanchez late on as the Chilean attempted to double his side's tally with an attempted lob, but Espanyol stood little of chance of getting back into the game once they found themselves a goal and a man down. 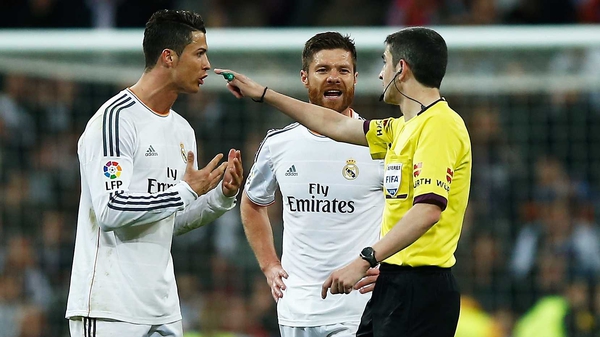 Cristiano Ronaldo: Clasico ref not up to job