Celtic's belated Scottish Premiership title-winning celebrations fell flat as they were held to a 1-1 draw by Ross County at Parkhead.

Neil Lennon's side had clinched their third successive title with a 5-1 win over Partick Thistle at Firhill on Wednesday night and were looking to put on a show for their supporters, but the home crowd were silenced in the 15th minute when Dutch striker Melvin de Leeuw fired the visitors ahead.

Kris Commons equalised from close range in the 34th minute with his 28th goal of the season and both sides hit the woodwork after the break before settling for a point which better suited the resolute visitors, who are battling to remain out of the relegation play-off spot.

The visitors applauded Celtic on to the park, but many expected the Hoops to then play Derek Adams' side back off it. 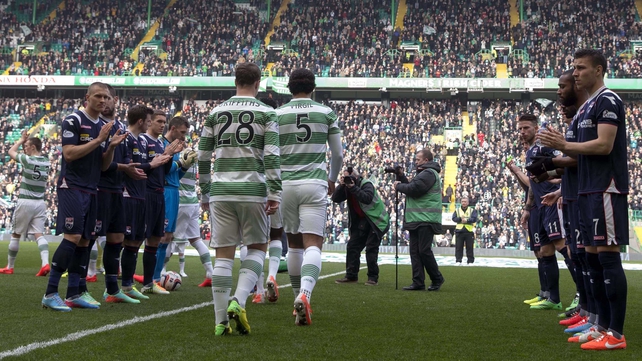 And as early as the first minute, Commons set up Emilio Izaguirre on the left and his driven cross was only just missed by Anthony Stokes.

Commons and Norwegian midfielder Stefan Johansen fired long-distance efforts wide of the target to suggest a long day for the Staggies.

However, Parkhead was stunned when De Leeuw took a pass from former Hoops midfielder Graham Carey and arrowed a low drive past Hoops keeper Fraser Forster and into the far corner of the goal for his eighth of the season.

The goal was not in the script and it took time for Celtic to respond as County looked as if they had the audacity to grab a second. 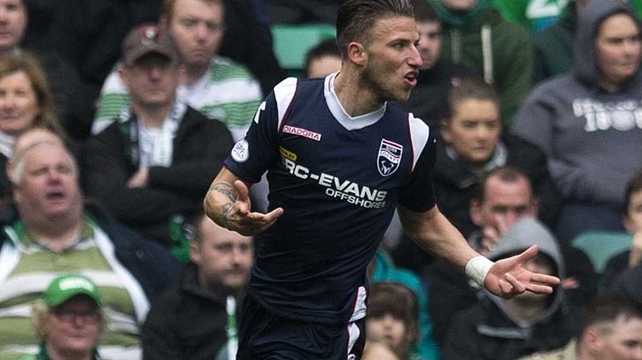 Stokes' free-kick from 25 yards in the 21st minute was grabbed by former Celtic keeper Mark Brown at the second attempt, but moments later, at the other end, De Leeuw attempted a back-flick from a Carey corner which cleared the bar, drawing murmurs of appreciation around the ground.

When the Parkhead side drew level, there was no surprise that top-scorer Common was the name on the scoresheet.

Brown could only parry Leigh Griffith's drive from the edge of the box and the former Derby and Nottingham Forest player was first to react, knocking the ball in from around eight yards.

As Lennon's men took control all the way to the interval, County defender Erik Cikos denied Griffiths a certain goal with a block on the stretch at the expense of a corner which came to nothing. 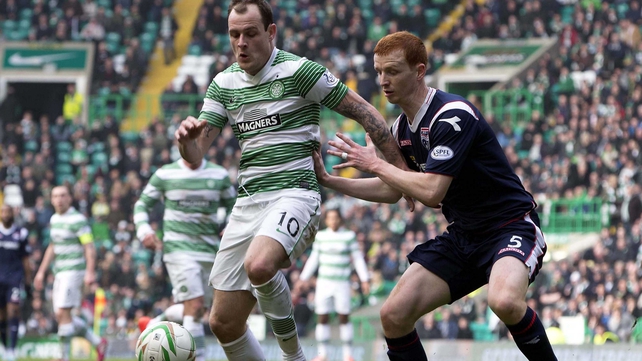 With only seconds gone in the second half, Stokes set up Efe Ambrose, playing right-back in the absence of injured Adam Matthews, but after dribbling past a few tackles inside the County box his shot was blocked.

It was a sign, though, that Celtic had been reminded of their duties by boss Lennon at the interval.

In the 51st minute Johansen reached the byline and stood a cross up at the back post for Liam Henderson, but the 17-year-old midfielder's header from a tight angle rebounded off the post.

Celtic's corner-count mounted but sheer weight of numbers in the Staggies' defence was proving a formidable barrier, although a bizarre, needless, long-distance pass-back from Carey in the 65th minute almost allowed Griffiths to go through against Brown.

Georgios Samaras replaced Commons a couple of minutes later, with Beram Kayal coming on for 18-year-old defender Eoghan O'Connell, making his debut, while for the Dingwall side, Jordan Slew replaced De Leeuw but the game was in danger of petering out.

The home side tried to up the tempo in the closing stages but it was County who came close to regaining the lead in the 82nd minute, when Carey's long-distance drive beat Forster but clipped the post before going behind.

Although some of County's defending in the final seconds was at times desperate, they held on for a deserved share of the spoils.