Peter Odemwingie continued his fine goalscoring form as Stoke recorded their third successive victory with a 1-0 triumph over Hull at the Britannia Stadium.

Odemwingie struck in the 62nd minute, firing in from the edge of the box after collecting the ball from a stray Ahmed Elmohamady pass to register his fourth goal in three games, and fifth since joining the Potters from Cardiff in January.

The hosts had earlier been indebted to their goalkeeper Asmir Begovic when he kept out a David Meyler shot that had taken a wicked deflection, and in the first half Hull defender Liam Rosenior failed to make the most of a good chance.

Overall, though, Stoke were good value for a Barclays Premier League win that takes them to 40 points for the campaign with six more games to go.

Mark Hughes' men are finishing his first season in charge strongly, having lost only one of their last nine matches and won four of their last five.

They are 10th in the table and their hopes of improving on their best-ever Premier League final position of 11th and points tally of 47 this term is looking increasingly realistic.

Hull, meanwhile, are 14th on 33 points, seven points above the relegation zone.

There has been considerable enthusiasm about Stoke's results and performances of late - particularly their 4-1 win at Aston Villa last weekend - but there was little to get excited about in a scrappy first half of this encounter.

After Peter Crouch headed wide from a corner early on, Tom Huddlestone threatened at the other end, bringing a diving save out of Begovic with a drive from outside the box.

Moments later a decent opportunity went begging for the visitors when Rosenior, finding space in the Stoke area, connected with Shane Long's cross but could only direct his header over the bar.

Odemwingie struck an optimistic effort from distance that bobbled wide after some patient Stoke build-up play just before the half-hour mark, and in the closing stages of the half the Nigerian squared to Marko Arnautovic, whose scuffed shot was easily collected by Steve Harper.

Stoke looked to up the tempo after the break and Odemwingie lashed an attempt goalwards that Harper got behind, before Crouch skewed wide with a shot on the turn.

The Potters then breathed a sigh of relief when Meyler's strike looped off one of their players on its way towards goal and Begovic did well to palm it away, the ball subsequently going wide with Nikica Jelavic unable to make anything of the rebound.

Six minutes later, Stoke had the lead as Odemwingie capitalised on Hull midfielder Elmohamady's misjudged cross-field ball, intercepting it, driving forward, getting past Curtis Davies and cracking the ball home.

Hughes' side continued to press, and after Arnautovic burst through and saw his shot blocked by Rosenior, Stephen Ireland's effort was pushed over by Harper. 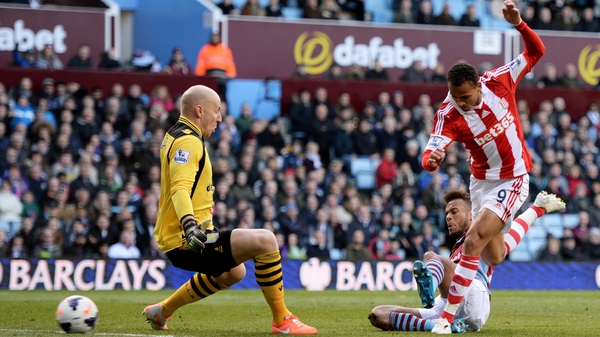