Liverpool may be third favourites in a three-horse race to lift the Premier League title but they continue to get results like they neither know nor care.

Struggling Sunderland were a hurdle they were expected to clear comfortably but the 2-1 scoreline showed it was not a trademark performance of fluidity and control.

Steven Gerrard's free-kick broke their opponents' resistance late in the first half but it was Daniel Sturridge's strike just after the break which had statisticians reaching for the history books before substitute Ki Sung-Yeung's header made for a tense finish. 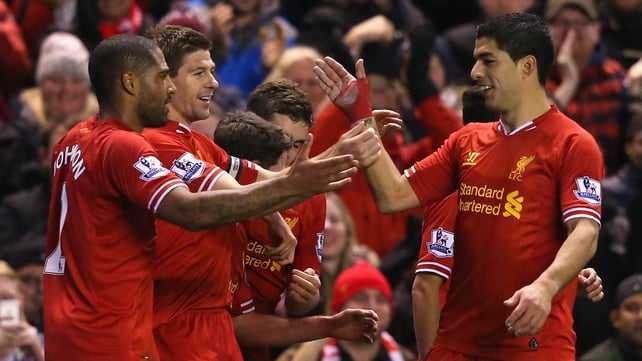 In scoring his 20th league goal of the campaign, moving to within eight of team-mate Luis Suarez, England international Sturridge ensured he and his strike partner achieved a feat not seen in these parts for 50 years since Ian St John and Roger Hunt achieved it.

Only six times previously have two Liverpool players scored 20 league goals apiece and in four of those campaigns they went on to win a league title - twice Division One and twice Division Two.
A banner in the Kop before kick-off read 'Anything is possible if you believe' and by the end the stadium was reverberating to chants of 'We're going to win the league'.

There is still plenty of ground to cover before their 24-year wait becomes a reality and the visits of Chelsea and Manchester City take on greater significance with every passing day.

But a seventh successive victory moved them back into second place in the table, just a point behind the Stamford Bridge club, and two ahead of City, who have a couple of matches in hand.

Their team coach had been greeted on arrival at the ground by an avenue of flags and banners down Anfield Road, with fans keen to herald the side they firmly believe will be the new kings of the Premier League.

The atmosphere inside was no less excitable but whether it was the weight of expectation which lay heavy on the players' shoulders or Sunderland's tactics of packing the defence and denying the Reds any attacking width, Brendan Rodgers' side did not match the supporters' fervour in the early stages.

Suarez fired over a free-kick and also delivered a delightful cross with the outside of his right foot which sailed just too high for Sturridge to do anything other than head up in the air.

Joe Allen, running from deep, and Suarez again - this time cutting in from the right on a quick counter-attack - were both off-target with efforts as frustrations began to grow.

Liverpool were trying to be almost too precise in their execution of Rodgers' plan and, as a result, the ball often overran or just bobbled out of reach.

Sunderland's tactic of leaving two men up the field at all times drastically cut the effectiveness of Liverpool's two full-backs, key to providing width and getting in behind their opponents, and led to Philippe Coutinho in particular trying impossible passes through the Black Cats' massed central ranks which failed to pay off.

However, a much simpler lay-off from the Brazilian playmaker ultimately resulted in the breakthrough but Sunderland were lucky to just escape with conceding the goal.

Suarez had wriggled past Santiago Vergini and looked set to skip into the area only for the Argentinian to bring him down in the 39th minute.

Connor Wickham, recalled from a loan spell at Leeds, forced Simon Mignolet to tip wide in front of the Kop when his shot clipped Martin Skrtel but it was another deflection at that end which proved decisive.

Three minutes after half-time Sturridge collected the ball on the right side, switched it on to his left foot and struck a shot which caught enough of Wes Brown to help it loop over Mannone.
Suarez got in the way of his strike-partner's next effort, although he did try to redeem himself by attempting to beat the Sunderland goalkeeper at his near post with a backheel from the rebound.

Lee Cattermole hit the crossbar - a feat subsequently matched by Sturridge - before substitute Ki converted a corner with 14 minutes to go and, despite exerting some late pressure which saw John O'Shea miss a header from six yards, Sunderland remain three points from safety.