Tim Sherwood believes a top-four finish may yet be within Tottenham's grasp after they recovered from several "knocks in the privates" to end a four-match winless streak in style.

The Spurs head coach accused his players of lacking character in the 4-0 defeat at Chelsea two weeks ago, after which he also told those speaking of Champions League qualification to "wake up".

Defeats at home to Benfica - their largest European loss at White Hart Lane - and north London rivals Arsenal made matters worse, although the last few days have brought renewed optimism.

Spurs fell just short after an impressive late rally in their Europa League last-16 return leg at Benfica, before coming from two goals behind to beat Southampton 3-2 on their return to league action.

"We will try and do as best we can," Sherwood said when asked about reaching the top four at their rivals' expense.

"We know that it is going to be difficult. It's never an easy place to go, Stamford Bridge.

"It's a tough place to go but I think our performance there was very good for an hour. So we can't be too critical of the boys I have here.

"I am the only one who can be critical and I am. But I give them praise when it's right.

"We are going to try and accumulate as many points as we possibly can.

"I think we might be a point behind where we were last year and we pushed Arsenal really close so who knows what could happen.

"It is squeaky-bum time, time for the men to stand up and get as many points as we can."

Sherwood certainly does not seem to have any problems with the character of his players, which he questioned not so long ago.

Despite falling 2-0 behind to strikes from Jay Rodriguez and Adam Lallana, a Christian Eriksen brace and Sigurdsson's late strike meant they came back from two goals down to win a league match for the first time since November 2010.

"They ain't turned it in, have they? You have to admit that against Arsenal we deserved to win the game or at least get a point.

"Then we go away, against all odds, against Benfica, and we're gutted that we ain't progressed to the next stage. We should have done but we never.

"So we've took a couple of knocks in the privates and we've come back."

While Spurs kick on, the last-gasp defeat may well end any remaining hopes Southampton had of qualifying for Europe.

"Mathematically it's still possible to get into Europe," manager Mauricio Pochettino said.

"But we also have to see if the reality of the team is enough for us to be playing in Europe." 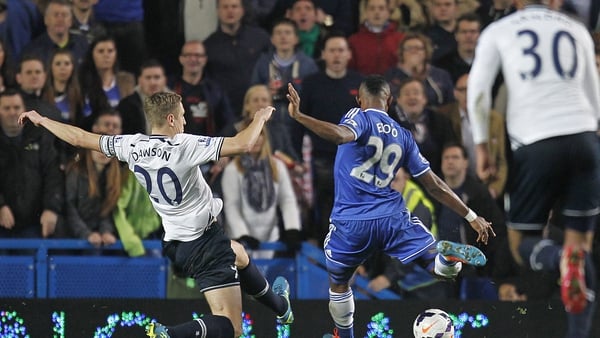