UCD registered their first league win of the season when deservedly overcoming Athlone Town by 2-1 in their SSE Airtricity League Premier Division encounter at Belfield.

Despite enjoying the brighter start, the visitors fell behind in the 34th minute as Robbie Creevy was left unmarked to glance home Robert Benson’s free-kick.

Aymen Ben Mohamed’s superb individual strike in the 49th minute doubled the students’ lead and despite Philip Gorman replying for in the 70th minute, UCD held on with Conor O’Donnell denying Gorman with a superb save in added time.

There was a dramatic start to proceedings with the visitors awarded a penalty in the 3rd minute following a foul on Philly Gorman by Michael Barker.

Despite Robbie Creevy spurning a glorious opportunity to open the scoring three minutes later, heading over from seven yards following Chris Mulhall’s corner-kick, the hosts were largely on the back foot early on with Jason Marks a lively presence on Athlone’s left wing.

The visitors continued to impress and Sean Brennan was unfortunate to see his 14th minute free-kick deflect to safety into the grateful arms of Conor O’Donnell.

There was little to be seen from UCD from an attacking perspective but three inswinging corner-kicks in quick succession by Mark Langtry in the 21st minute caused a great degree of discomfort for Athlone goalkeeper Paul Skinner.

Gradually, the hosts began to show greater fluency and an intricate piece of skill by Dean Clarke midway through the half forced Skinner to parry the centre-forward’s long distance shot.

However, the pressure finally reaped dividends in the 34th minute as Skinner was powerless to prevent Creevy glancing home Robert Benson’s inswinging free-kick with the away defence errant in their marking of the midfielder’s run.

Athlone responded well to that setback with Sean Byrne testing O’Donnell from twenty yards before Conor McMahon powered a header narrowly over from Sean Brennan’s corner-kick five minutes before the break.

Any hopes of restoring parity for Athlone were quickly dispelled within four minutes of the break as Ayman Ben Mohamed struck for a goal of the highest quality to double UCD’s advantage.

There seemed little danger as he received possession on the touchline forty yards from goal but a weaving run that outfoxed both Kealon Dillon and McMahon culminated in a confident strike beyond Skinner from fourteen yards.

From this juncture, UCD seemed content to allow Athlone to enjoy a greater degree of possession as they looked to utilise Ben Mohamed’s pace on the counter attack with Clarke testing Skinner from distance in the 66th minute.

The points should have been secured a minute later but Morrison blazed over following a superb cross from Barker and UCD were left to rue that miss as their lead was halved in the 70th minute.

There seemed little danger as Alan Byrne flighted an innocuous ball into the heart of the UCD defence but Gorman rose majestically above Tomas Boyle to plant a powerful header beyond the despairing dive of O’Donnell.

Suitably emboldened, the visitors pushed for a leveller with Brennan especially wasteful as he fired over when well placed in the 75th minute.

The pressure was maintained with O’Donnell tipping over Gorman’s powerful shot in the 82nd minute and from the resultant corner-kick, Derek Prendergast saw his downward header diverted past the post by the UCD netminder. 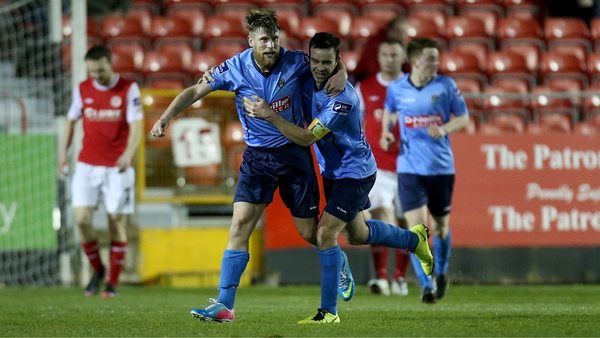