Manchester United manager David Moyes praised his side for the spirit they showed in seeing off Olympiakos 3-2 on aggregate, especially after a difficult couple of days following their 3-0 defeat to Liverpool.

"The way the players responded after Sunday's defeat [was most pleasing]," he said. "I did say to them on Monday morning that we'd have to win 3-0 and give crowd something back.

"We looked to get behind them. The players were incredibly committed. They are hurting as well; they know we are not doing as well as we should be doing.

"We didn't play well in Olympiakos. Tonight they put it right - they deserved it. The players gave everything and never left anything behind."

"We know the job I have to do. It's a big job, probably bigger than we all expected when I first came in" - David Moyes

Defeat to Liverpool had led to more questions over Moyes' position, but he denied he felt any pressure that he might lose his job.

"I don't think so," he said. "People will probably think it’s a turning point in people's careers. I didn't see it that way because I know the club have got here and the club know what they've got here.

"I see myself here for a long time, but I've got a big job and there are a lot of things I've got to do and I'm not going to be able to do it all immediately. The one thing they did show was a great, big heart.

"I'm not feeling any pressure from inside the club. It's all coming from you people [the media]. Everybody is fine, we know the job I have to do. It's a big job, probably bigger than we all expected when I first came in.

Moyes was wary of describing the win as a turning point for his side's season, after experiencing too many false dawns already since arriving at Old Trafford.

"That question has been asked of me every time we have a good victory and we've never backed it up," he said.

"I'd love to say 'yes' and that's the answer, but I think we know we've got a lot of work to do here.

"We've had a great result tonight and we're going to try and keep going in the competition. We know it is going to be a struggle. We're looking forward to whoever we get in the draw."

Moyes was also able to deliver good news on Robin Van Persie's knee injury, which forced the hat-trick hero to come off on a stretcher shortly before the end of teh game.

"It doesn't look that bad,” Moyes said. “He got a knock around the knee injury, so we don't know exactly. It could just be a knee in the back of knee. It was a great hat-trick."

He described Ryan Giggs as a "freak" after his breathless performance in midfielder.

"I thought Giggsy was fantastic," Moyes said. "The passes he made for the two goals, his general play - more importantly his general fitness. Sometimes you think he'll need to come off after 60 minutes, but he's a freak. He's something different.”

Live web-only coverage of the draw for the quarter-finals of the UEFA Champions League from 10:55 on Friday 21 March on RTÉ.ie (RoI only). 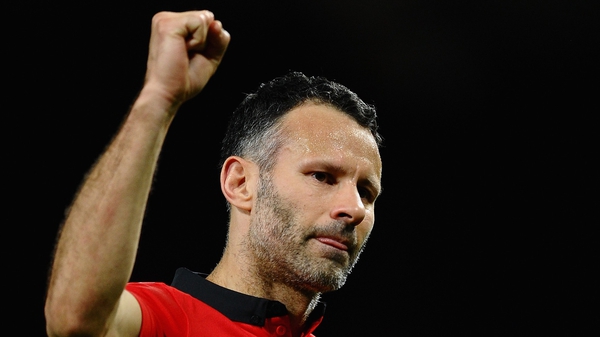