Cristiano Ronaldo scored twice as Real Madrid completed the formalities of their last-16 tie with a 3-1 win over Schalke at the Bernabeu to go through 9-2 on aggregate.

However the Spanish side's night was soured by a potentially serious injury to talented young forward Jese.

A brace from Cristiano Ronaldo, his 40th and 41st goals of the season, and one for Alvaro Morata sealed a 3-1 victory on the night as Madrid dotted the i's and crossed the t's on a last-16 tie that was as good as over in the wake of their 6-1 victory in the first leg three weeks ago.

Tim Hoogland's heavily deflected strike was all Schalke had to show from their trip to Madrid, although Jens Keller's men were at least spared a repeat of the abject drubbing they suffered on home turf last month.

Only four Madrid players who started that commanding victory in Germany were named in the starting XI for the return at the Bernabeu, with Iker Casillas, Sergio Ramos, Xabi Alonso and the indefatigable Ronaldo all keeping their places.

Jese was one of the fringe players brought in by Carlo Ancelotti but the 21-year-old's night was over almost immediately, the forward reportedly suffering a suspected anterior cruciate ligament injury in an innocuous tussle with Sead Kolasinac inside two minutes.

The unfortunate Spain Under-21 international - an outside tip to make the senior squad at this summer's World Cup - was replaced by Gareth Bale and the Wales international did not need long to make a telling impact.

With 22 minutes gone, good work by prolific Spain Under-21 striker Morata created the chance for Bale to work a yard of space on the right and drill in a low cross that Ronaldo turned home first time to take him past the 40-goal milestone for a fourth successive season.

Bale nearly had another assist five minutes later when he raced clear of his marker down the right and sent a perfectly-weighted pass into the area for Morata who had only make a telling connection to be sure of finding the net but instead fluffed his lines.

Despite their mauling three weeks ago Schalke were a good match for Madrid throughout the half and deservedly pulled one back after half an hour when Hoogland was allowed to advance through the midfield before rifling an effort that took a massive deflection of Ramos to wrong-foot Casillas.

Isco's stinging 20-yard effort drew a good save from Ralf Fahrmann as Madrid sought an immediate response. Fahrmann then denied Morata, Ramos and Nacho as the hosts continued to press for another before the break, even with the overall leading standing at 7-2.

Yet it was the visitors who should have taken the lead on the night in the 40th minute. Madrid were sloppy in ceding the ball in midfield and Max Meyer was able to break away, the midfielder threading the ball through for Klaas Jan Huntelaar, who dragged his effort just wide of the post.

Fahrmann was back in action early in the second period when he somehow scooped Ronaldo's downward header over the bar, and again excelled in the 55th minute when he smothered Isco's shot after the midfielder had deftly cut inside his marker.

But Madrid's goal threat was ever-present and it came as no surprise when they regained the lead on the night with 74 minutes on the clock, Ronaldo collecting the ball in midfield and running powerfully at the back-pedalling home defence before drilling a low effort inside Fahrmann's near post.

Ronaldo could and should have been celebrating a hat-trick two minutes later when he fired against the bar with the goal at his mercy after Fahrmann had saved Morata's initial effort, but although Ronaldo had been thwarted the danger had not passed and Bale was able to steer the ball back towards the waiting Morata, who clinically slotted home.

There was still time for Ronaldo to wrap up his treble but when the opportunity came his way inside the final 10 minutes his placed shot beyond the advancing Fahrmann came back off the right-hand post. 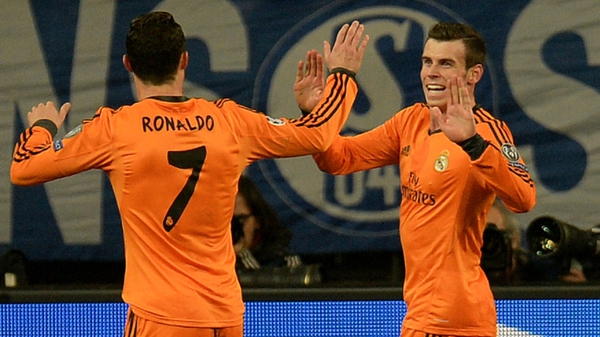