Didier Drogba's return to Stamford Bridge ended in defeat as Chelsea beat Galatasaray 2-0 in the Champions League last-16 second leg to progress to the quarter-finals.

Jose Mourinho warned of a dangerous tie poised 1-1 after the first leg in Istanbul three weeks ago, but four minutes into the second leg his side regained the advantage before advancing into Friday's last-eight draw with ease, 3-1 on aggregate.

Drogba, scorer of 157 goals in 341 appearances over eight years for the Blues, including the decisive penalty in the 2012 European Cup win, was expected to be the main protagonist of the contest.

But it was another 30-something African striker who found the net with the first attack as, for once, the Ivorian faded into the background on the big occasion, with Eden Hazard the outstanding forward on display.

Samuel Eto'o showed his predatory instinct to fire the Blues in front at the end of a move started by Hazard and Gary Cahill added a second before the interval to give Chelsea a commanding two-goal advantage.

Chelsea were unable to add to their tally, but did not need to.

Roberto Mancini's visitors were a distant second best throughout and offered up little resistance as the former Manchester City manager's return to England ended in a limp loss.

Given Manchester United and Tottenham face two-goal deficits - on Wednesday against Olympiacos in the Champions League and on Thursday at Benfica in the Europa League, respectively - it is possible Chelsea will be the only English club in Europe come Friday's draws.

Their immediate attention now turns to Saturday's Premier League showdown with Arsenal, where Mourinho's leaders will hope to put the controversial loss at Aston Villa firmly in the past in Arsene Wenger's 1000th game as Gunners boss.

Wenger was branded a "specialist in failure" by Mourinho last month.

Mourinho is a serial winner and has twice won the Champions League, but not with Chelsea. Not yet.

Drogba was presented with a silver boot by Chelsea for his achievements in Blue, which ended with that magical night in Munich, and was acknowledged with the acclaim of all sides of the ground as both home and visiting supports sang his name.

The Ivory Coast striker embraced Mourinho in the seconds before kick-off and lined up against a Chelsea XI showing two changes following the loss at Villa Park, with Eto'o and Frank Lampard in for Fernando Torres and Nemanja Matic, who was ineligible.

Eto'o, a Champions League winner with Barcelona and Mourinho's Inter Milan, justified his inclusion with his 10th of the season - all of which have come at home - after breaching the offside trap to latch on to Oscar's pass and convert with a shot which squirmed under Fernando Muslera's right hand.

Another Inter player then was Wesley Sneijder, who was a peripheral figure for Galatasaray as Drogba tried to spark the visitors' reply by hitting a bicycle kick into the Matthew Harding End, which is adorned with a banner reading 'Drogba Legend'.

Chelsea - and Hazard, in particular - were finding holes in the visiting defence and Felipe Melo was booked after a series of fouls, usually on his fellow Brazilians.

Hazard's run had helped to set up the goal and the Belgian's one-two with Oscar led to a chance for Lampard, which the midfielder could only prod over.

Hazard showed great strength to out muscle former Arsenal right-back Emmanuel Eboue on the right wing and tried to fashion another chance only to be crowded out at the byline and then had a shot saved.

Lampard's free-kick was volleyed narrowly over by John Terry and a Drogba set-piece from a similar distance at the other end was so far over it hit the banner bearing his name.

Hazard and Eto'o combined to set up a chance for Willian, who could only weakly direct the ball straight at Muslera, but soon Chelsea had their second.

Lampard and Terry combined at another set-piece and this time the captain's header from a corner was saved, with Cahill following up to thrash the ball into the net.

Chelsea set about trying to add to their lead and went close in the opening skirmishes of the second period.

Oscar was unable to test Muslera after a mesmerising Hazard run before the Galatasaray goalkeeper saved from Willian and Oscar shot wide after cutting in from the left.

Lampard headed straight at Muslera as Chelsea continued to search for a third, before Drogba was booked for tugging back Cesar Azpilicueta.

Azpilicueta chipped off target before Hazard was denied by Muslera.

Torres, on for Eto'o, was teed-up by Hazard and denied by the visiting goalkeeper as Galatasaray and Drogba were eliminated. 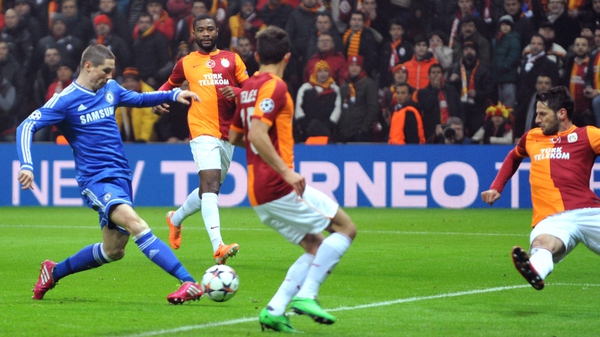