The pressure on Tim Sherwood and Tottenham cranked up a gear as their hopes of reaching the Europa League quarter-finals were made remote by Benfica's comprehensive victory in north London.

However, there was to be no morale-boosting response in this last 16 tie against Benfica, who ran out 3-1 victors to make them overwhelming favourites to progress ahead of next week's second leg.

Failure to overcome the Portuguese giants - now unbeaten in 24 matches - likely means Tottenham face another year without a trophy and is hardly the ideal preparation for this weekend's north London derby against Arsenal.

That is a match which could extinguish any remaining top-four hopes harboured by Spurs, whose manager Sherwood's position is likely to come under even more scrutiny after this latest defeat.
Benfica were always going to prove tough opponents, with last year's Europa League runners-up arriving in north London unbeaten in 18 weeks.

They had won 21 of 23 fixtures in all competitions during that run, which looked likely to be extended when Bolton loanee Rodrigo slotted home after a tremendous Ruben Amorim ball just before the half-hour mark.

Spurs failed to test Benfica goalkeeper Jan Oblak in the first half and were jeered off at half-time, from which they returned with Emmanuel Adebayor uncharacteristically dragging wide when well placed.

The missed chance allowed the visitors to take control as woeful defending allowed Luisao to divert home, before Christian Eriksen reduced the deficit with a wonderful free-kick.

However, Spurs never looked likely saving their 11-match unbeaten European record at White Hart Lane as Luisao smashed home his second of the night, with Sherwood and counterpart Jorge Jesus refusing to shake hands at the final whistle.

Eyebrows were raised ahead of kick-off when Harry Kane was handed just his second start of the season ahead of Spain international - and programme cover star - Roberto Soldado.

Paulinho was the other alteration from the side hammered at Stamford Bridge, starting in central midfield alongside Sandro - who picked up an early yellow card after breaking up a Benfica counter-attack that followed a woeful Eriksen free-kick.

Sandro was soon involved again as he fired the hosts first chance of the evening over the bar in the 15th minute, before Silvio beat Adebayor to a decent Aaron Lennon cross and Luisao prevented the Togo striker meeting a Kane knockback.

Spurs were unable to capitalise on a flurry of corners that followed but almost got lucky when Oblak misread a Younes Kaboul clearance, only to recover to stop Eriksen slotting into an empty net.

That was the closest Sherwood's side had come to testing the Benfica goalkeeper and that inability to turn possession into clear-cut chances cost them in the 29th minute.

Up until that point Benfica had only managed a tame Luisao header, but a wonderful Ruben Amorim through-ball changed that. Rodrigo ran behind Kyle Naughton to receive the pass and continued to impressively send a low left-footed strike past Hugo Lloris.

It was a goal that saw Spurs wobble and struggle to make an impact, with the half-time whistle met by boos from some sections of the White Hart Lane faithful.

The break came at a good time for the hosts and they threatened four minutes after play resumed.

Eriksen played a neat pass to put Adebayor behind the Benfica backline for the first time, only for the forward to drag Spurs' best chance of the night wide.

Lennon struck straight at Oblak with the hosts' first shot of the night in the 52nd minute, although Rodrigo's audacious strike wide at the other end highlighted the visitors' attacking threat.

Lloris watched that effort wide but had to be at his best to tip over a fine Ruben Amorim strike after Kane was dispossessed.

The danger was far from over, though, and Benfica doubled their advantage from the resulting corner.

Ruben Amorim was again the provider, swinging in a corner met by the towering - and unmarked - Luisao to head home.

It was atrocious defending from Tottenham - but they pulled a goal back in style in the 64th minute as Eriksen struck home a superb free-kick.

The strike raised the volume inside White Hart Lane and captain Kaboul headed the Dane's next free-kick at Oblak, whose opposite number was having a hit-and-miss match.

Lloris, known for dashing off his line, saw a long ball bounce over his head and only just managed to get back to stop Rodrigo netting into an open goal.

Soldado came on for Kane as Sherwood looked to change the attacking dimensions, although they were again undone at the other end as Benfica took a firm grip on the tie.

Lloris did well to save substitute Nicolas Gaitan's initial header, but Luisao was well placed to rifle in the rebound off the underside of the bar.

The goal led Jesus to show three fingers to Sherwood, antagonising the Spurs boss at the end of a match in which the managers did not shake hands. 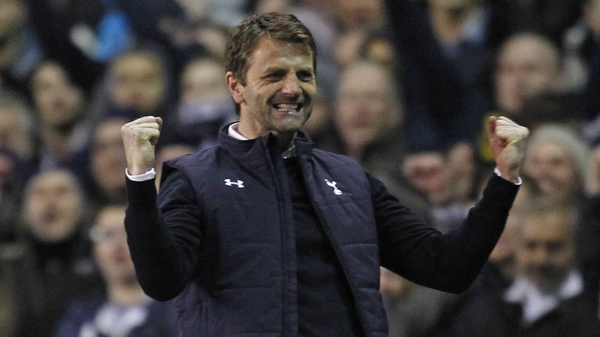