Two goals from Steven Caulker gave Cardiff's survival hopes a huge boost with a 3-1 win over bottom-placed Fulham to leave Felix Magath's side needing a miracle to avoid relegation.

The England international had scored just twice in his last 29 starts, but two close-range finishes within 22 minutes set the struggling Bluebirds on course for their first three points since 1 February, to lift them to within goal difference of West Brom and safety.

His tap-in on the stroke of half-time was cancelled out by Lewis Holtby's first Fulham goal, but the Cottagers then switched off at a corner allowing Caulker to gleefully head home his fourth of the season.

An unfortunate own goal from Sascha Riether sealed the victory with 19 minutes left to leave the visitors four points adrift of safety.

While Cardiff recalled Craig Noone, Jordan Mutch and Kenwyne Jones to their starting line-up, it was Magath's attacking selections that raised eyebrows.

The German partnered record signing Kostas Mitroglou, with only 30 minutes of football under his belt since arriving from Olympiacos, with untried teenager Cauley Woodrow, whose last competitive game came on loan at Southend in January.

Both sets of supporters were encouraged by West Brom's thumping home defeat by Manchester United at lunchtime but they had little to cheer about in the opening exchanges.

It was 10 minutes before the first sniff of goal, Ashkan Dejagah firing his effort into the side netting from a tight angle after a quick free-kick.

Ole Gunnar Solskjaer, never on the losing side against Fulham as a player, sent his Cardiff side out in a 4-3-3 formation with Fraizer Campbell on the left flank, and the former Manchester United forward showed clever feet before bending a shot towards the far corner that Maarten Stekelenburg pushed away.

Craig Noone was proving a constant menace to John-Arne Riise and the winger was next to threaten with a mazy run which ended with a low left-footed drive that flew just wide of the post.

Both sides were struggling to string passing moves together and when Cardiff did manage to carve out a chance through a deep cross from Jordan Mutch, Kenwyne Jones could only nod his delivery at Stekelenburg.

The Dutchman denied Jones again with a smart stop in the 44th minute when the target-man peeled off to the back post to thump Mutch's low delivery towards goal.

The Bluebirds' 445 minute wait for a Premier League goal came to an end on the stroke of half-time when Noone's low delivery from the left deflected kindly into the path of Caulker, who became their second top goalscorer of a forgettable campaign in front of goal.

Having netted just their third first-half goal in their last 17, the home side started the second half on the front foot with Mutch firing wide.

David Marshall had been a virtual spectator in the first half but he had to be alert to push Holtby's half-volley away from danger.

After a mediocre first half this game had sprung into life, with Jones missing a gilt-edged chance to open up a two-goal cushion when he headed wide when well placed.

Fulham had begun to edge their way back into the match and they were level in the 59th minute when the recalled Holtby was left unmarked in almost the exact spot where Caulker netted after Johnny Heitinga flicked Giorgios Karagounis' corner into his path.

But it was Fulham's failure to defend set-pieces which would see Caulker head Cardiff back in front just eight minutes later.

Noone swung in a left-footed corner and Campbell and Caulker were given the freedom of the box, with the latter rising unchallenged to nod the ball under Stekelenburg.

And the relief inside the Cardiff City Stadium was tangible when the victory was sealed in the 71st minute. Mutch met Noone's dangerous cross with a header which Stekelenburg pushed into the path of Riether, and the defender could only look on as the ball trickled over the line.

Fulham did briefly threaten to set up a grandstand finish, Marshall tipping Mitroglou's effort over the bar before Steve Sidwell's smart header was ruled out for offside. 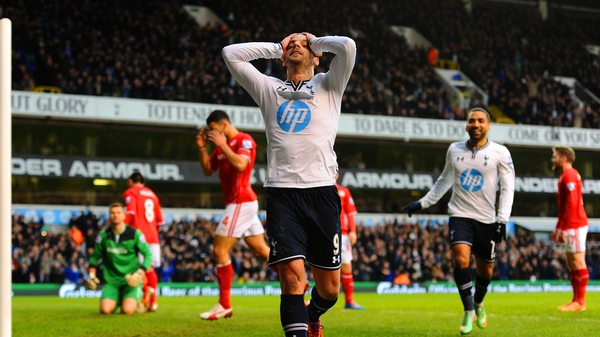