Midfielder Ciara Grant took plenty of positives out of the Republic of Ireland women’s opening draw against New Zealand at the Cyprus Cup on Wednesday.

The 20-year-old third year medical student finally played a full 90 minutes at senior level on her way to winning her eighth cap, and not even the disappointment of failing to hang on for a famous victory could dampen her happiness at achieving a significant personal milestone.

The Donegal woman said: “I was very happy with my own performance and that fact I finally played for 90 minutes at senior level.

“I haven’t had many starts either so it was nice to be in from the beginning and be still there at the end.

“It was a very hard, tough game. We played three in centre midfield and by the end of the game, when they were chasing it, they had five there which made it hard. I thought we were going to hold out but it wasn’t to be. Still it was a great result.”

Centre midfield is one of the most of the competitive areas in the women’s team and Grant is well aware that there are plenty of options open to manager Sue Ronan.

She continued: “There were five players on the bench yesterday who could play in centre midfield in addition to the three who were on the pitch.

“That’s eight fighting for three places so it is very competitive but it keeps everybody on their toes and pushes us all to keep improving.”

Grant is part of a group of home-based players who gather every Friday night at the National Sports Campus in Abbotstown for a training session which involves strength and conditioning as well as ball work. She is already seeing the benefits.

“The football side is very quick and a lot quicker than what we would have been used to before but it helps to get us ready when we move up to international level,” said Grant who created her own little bit of history last November when she became the first women to score a goal at the Aviva Stadium as she helped Raheny United to a 3-2 win over Castlebar Celtic in the FAI Umbro Women’s Cup final,

“It was nice. I certainly hadn’t thought about it beforehand because I don’t score many goals, I usually make them. But it was great to play in our national stadium and hopefully I’ll get another chance soon.” 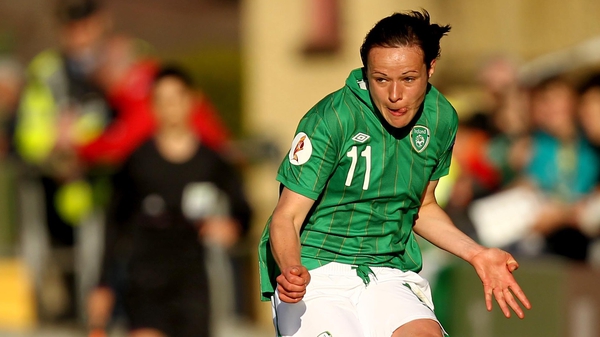