Shamrock Rovers got their Setanta Sports Cup defence off to the best possible start with a thumping 5-1 win over Glentoran in their quarter-final, first leg tie at Tallaght Stadium.

In all five different players netted for the Hoops, with Robert Bayly, Kieran 'Marty' Waters, Stephen McPhail, Gary McCabe and Simon Madden on hand to leave Glentoran with a tough task to retrieve the situation in three weeks time.

Bayly's volley set the Hoops on their way after seven minutes, but the Irish League side levelled when John McGuigan's deflected effort trickled over the line on 23.

The home side regained the lead on the hour mark when former Bray Wanderers player Waters found the range, courtesy of another deflection.

Stephen McPhail's home debut saw him come off the bench and score from a free-kick on 74 minutes. A Gary McCabe volley on 80 and a Simon Madden's effort in injury time completed a satisfactory night for Trevor Croly's side. 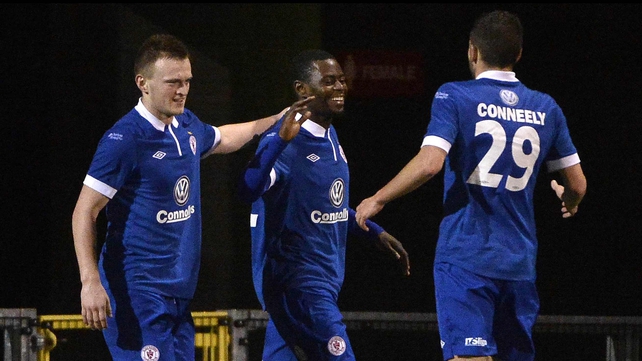 Former Derry City player David McDaid scored a brace as Coleraine took a 3-2 advantage in their tie with Dundalk at Oriel Park.

Ruairi Harkin was also on the mark for the victors, with Daryl Horgan, who had put Dundalk in front early on and David McMillan, netting for the home side.

Chris Forrester turned Keith Fahey's shot into the net on 21 minutes for the decisive goal.