The visitors appeared poised to finally lift themselves off the foot of the Barclays Premier League on the back of Ashkan Dejagah's first-half strike at The Hawthorns.

Despite the Dutchman's strenuous efforts to stop the ball crossing the line, referee Mike Dean was aided by the goal decision system, handing Albion their fourth consecutive home draw under new manager Pepe Mel after going behind.

But it is now six matches without a win for Mel, who has seen his side come from a goal down against Everton, Liverpool, Chelsea and now Fulham, but the Spaniard will know draws are not going to keep the Baggies in the top flight.

As for Magath, the 60-year-old - the first German to manage in the Premier League - had seen Stekelenburg produce a number of superb saves to keep Fulham in front after the break, only to suffer the late heartbreak that kept the Cottagers rooted at the bottom.

As opening 45 minutes go for a new manager, though, Magath could not have asked for too much more from his players - certainly not in terms of work ethic.

Fulham deservedly led at the break courtesy of a fine strike from Dejagah, and could have added more but for some wayward finishing and a couple of excellent saves from Ben Foster.

Those two early chances should have served as a wake-up call for Albion, but instead there was a degree of lethargy from Mel's team.

After a six-day break in Jerez since their last encounter, when they held Chelsea, it appeared as if some of Mel's players still had their minds on southern Spain.

The home side were fortunate not to find themselves a goal down in the 22nd minute, Steve Sidwell sidefooting over a simple chance following a right-wing cross from Dejagah.

On the counter-attack, Albion conjured what proved to be their only chance of a lacklustre half, although it should have resulted in a goal.

Playing a one-two in a swift move with Morgan Amalfitano, on-loan striker Thievy Bifouma rattled a 16-yard effort against the advancing Stekelenburg.

Holtby's swing and a miss was instantly forgotten as Dejagah took one touch before incisively rifling a low right-footed shot into the bottom-right corner between defenders Jonas Olsson and Liam Ridgewell.

The celebrations that followed Iran international Dejagah's third goal of the season were telling as a number of Fulham players ran to the touchline to celebrate with the backroom staff.

As for Magath, he simply rose from his seat and gave Holtby further instructions, the 23-year-old previously having worked with him at one of his eight German clubs, Schalke.

It was a lead that was almost doubled four minutes before the break, only for Foster to superbly turn aside a 20-yard half-volley from Hugo Rodallega.

Via a couple of changes - Victor Anichebe on for an injured Billy Jones just before the interval and Zoltan Gera for Bifouma at the break - the momentum of the game switched markedly in Albion's direction.

It required Stekelenburg to keep the Cottagers ahead, initially at full stretch in palming away a bouncing Chris Brunt drive, and then to stop a slightly deflected effort from James Morrison.

In between those two chances, Magath handed Greece striker Kostas Mitroglou his debut following his #12million arrival from Olympiacos on deadline day, but he was hardly noticeable.

After Saido Berahino curled a right-footed shot wide from 20 yards, Gareth McAuley then headed a Brunt corner past the post.

With Albion pressing, Vydra finally conjured the equaliser, and there could have been a winner in stoppage time, only for Stekelenburg to redeem himself with a stunning save to deny Brunt. 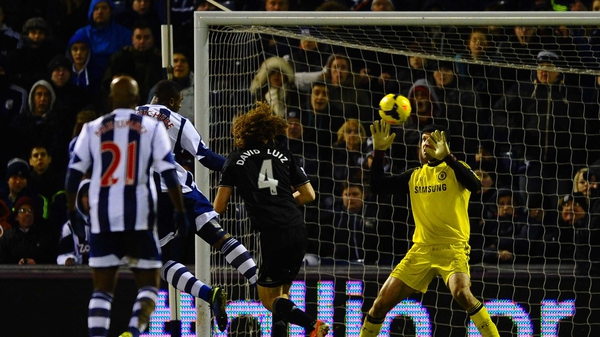