After two league games without a win and defeat to Barcelona in midweek, City were facing more frustration at the hands of their former manager Mark Hughes when Toure struck after 70 minutes.

Stoke also had the better of the first half at the Etihad Stadium but City finished strongly and would have won by more had Edin Dzeko not produced a remarkable miss.

Dzeko incredibly failed to make a clean connection when picked out unmarked, with an open goal, two yards out.

In the end it mattered little as City, without another league game until 15 March, got back to winning ways.

Manuel Pellegrini's men were sluggish in the first half and struggled to piece together meaningful attacks.

That Samir Nasri, who did not start against Barcelona, was one of their brighter players added to a feeling that Tuesday's high-intensity game must have taken its toll.

Pellegrini, who kept faith with much-maligned defender Martin Demichelis after his red card nightmare in the Champions League, had demanded a high-tempo start.

That failed to materialise and it was Stoke, playing their first game in 10 days and fresh from a training camp in Dubai, who looked the better side.

Fernandinho also tested Asmir Begovic with a long-range strike but Stoke came back with Jonathan Walters blasting wide and Charlie Adam forcing Hart into a fine low save.

Fernandinho brought down Peter Odemwingie with a poor tackle just outside the box but Adam hit a poor free-kick.

Adam was a transgressor himself soon after as he clumsily brought down Nasri to earn a booking but City could not take advantage from the set-piece.

City finally started to assert themselves as half-time approached as Toure combined nicely with Alvaro Negredo before blasting over.

Negredo was then involved again, playing a neat one-two to tee up Dzeko outside the box and the Bosnian only narrowly missed the target.

Fernandinho then rifled a shot at Begovic as City looked to carry some momentum into the second half.

City did show more urgency after the restart but Stoke defended well.

Pellegrini hoped the introduction of Stevan Jovetic just before the hour might provide the spark.

The Montenegro striker struck a sweet shot from outside the box but Begovic grabbed at the second attempt.

After City were frustrated at Norwich a fortnight ago, it began to look like Stoke could be the next side to take an unexpected point off them.

But this time City made sure pressure told. Nasri came into the middle and fed Aleksandar Kolarov out wide. He immediately whipped the ball into the middle and Toure, who had been driving forward at every opportunity, got in front of a defender to divert the ball past Begovic.

The relief around the stadium was evident and Dzeko should immediately have doubled the lead.

The Bosnian was presented with a glorious opportunity as Jesus Navas pulled the ball across goal but he somehow contrived to completely miskick.

Stoke cleared and Dzeko, furious with himself, kicked out at the post in anger. His embarrassment did not end there as his extraordinary miss was replayed a number of times on the big screen.

City remained on the front foot though and Begovic tipped around a shot from Javi Garcia. 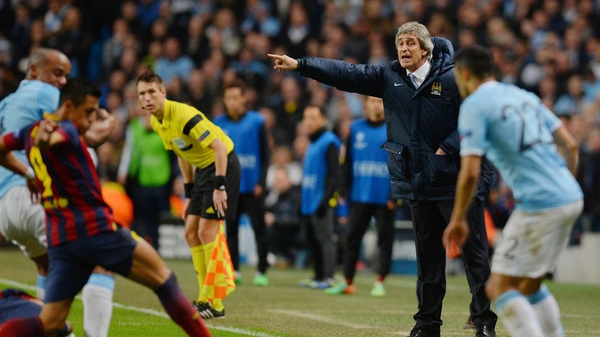