Chris McCann and Ben Watson were on the mark as Wigan kept their dream of winning a second successive FA Cup alive with a 2-1 win at Cardiff City Stadium.

Uwe Rosler's Championship battlers took another Premier League scalp to book their place in the quarter-finals of the competition.

Ben Watson, scorer of the winner in last season's final win over Manchester City, hit the first-half winner with a superb strike from 30 yards.

There were several new faces for the home fans to get behind. Spanish defender Juan Cala made his debut for the club, having joined from Sevilla.

But it was Wigan who produced the first meaningful attack when Callum McManaman latched onto a crisp cross-field ball from Watson before dragging the ball just wide of the left post.

And it was the Latics who opened the scoring in the 19th minute. When the Bluebirds failed to clear, the hustling Jordi Gomez pilfered the ball before finding McCann unmarked in the box.

Manchester United loanee Wilfried Zaha showed no urgency to intercept the cross and all McCann had to do was sidefoot it home.

The home fans' agony was compounded by the unfortunate fact that the goal was made by an ex-Swansea City player at whom they had been chanting abuse just seconds earlier.

Watson continued to play with freedom in the centre of midfield, putting McManaman - who shifted from right to left wing early on - through before he forced a corner.

As the half wore on Premier League outfit Cardiff - and Zaha - began to impose themselves.

After a scramble in the box and two blocked Cardiff shots, he struck low and hard past the unsighted Ali Al Habsi for his third goal of the competition, and eighth of the season.

Zaha opened his box of tricks as he started to become the threat Cardiff fans had been hoping for and crossed for Campbell who headed over.

Wigan were bereft of territory and chances until centre-back Cala gave away a free-kick almost 30 yards out, five minutes before the break.

He was made to pay as Gomez shifted the ball to Watson, who cracked it sweetly past in-form goalkeeper David Marshall.

A chance for an equaliser fell for the Bluebirds on the stroke of half-time when Cala emerged from a melee in the box to head the ball against the post from a yard.

After the break, Daehli continued his impressive afternoon in the Cardiff midfield when he repeatedly cut inside from the left and tested the opposition.

City keeper Marshall was almost embarrassed when he let a wayward cross go out for a corner, only for McCann to hook the ball goalwards, forcing a reaction save.

Daehli then unlocked the Latics defence again, only for Zaha to have a penalty claim turned down. The Norwegian twisted and turned before slotting a deft pass through to the winger, but referee Martin Atkinson saw a fair challenge.

A largely uneventful second half until the final 10 minutes was perfect for the visitors as they sat on their lead.

But for a couple of nervy moments - a deflected shot from Daehli and an Al Habsi save off Zaha - the Championship side looked relatively comfortable.

Bluebirds replacement Craig Noone also tested Al Habsi, forcing him to tip the ball, at full stretch, past his right-hand post.

That the Latics held on belied the fact they were relegated last season, while Cardiff leapfrogged them into the Premier League by winning the Championship.

There was a minute's applause before the tie got under way following the death of former Preston and England player Sir Tom Finney. 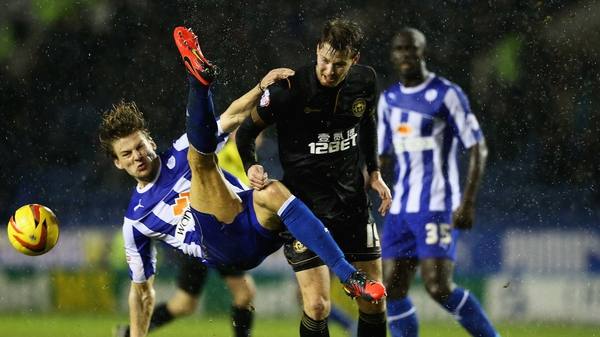