Manchester City missed the chance to go top of the Premier League as Norwich battled to a goalless draw on a frustrating afternoon for Manuel Pellegrini's men at Carrow Road.

Pellegrini had made three changes from the side which lost at home to Chelsea on Monday as they looked to take full advantage of Arsenal's 5-1 defeat at Liverpool earlier on Saturday.

However, it was the relegation-threatened Canaries - hammered 7-0 at the Etihad Stadium in November - who raised their game and soaked up plenty of pressure to earn themselves what could be a crucial point in their fight to stay up.

City had hit the crossbar in the first half through a header from Alvaro Negredo, but otherwise Norwich goalkeeper John Ruddy was not really troubled - and the home side almost snatched victory in stoppage time when Nathan Redmond's cross flew through the six-yard box just ahead of Ricky van Wolfswinkel.

The visitors created an early opening when a cross from left-back Gael Clichy was hacked away by Norwich defender Joseph Yobo, making his debut on loan from Fenerbahce, with David Silva lurking in the penalty area.

Norwich, though, showed plenty of attacking intent themselves, with a goalbound 20-yard drive from defender Martin Olsson cannoning off Pablo Zabaleta and behind for a corner.

On 16 minutes, Redmond was played in to the City penalty area on the overlap down the right, but the England Under-21 winger could only blast his angled drive high into the stand.

Norwich had a goal correctly ruled out for offside when Gary Hooper swept the loose ball home inside the six-yard box after Joe Hart had saved a bullet header from Leroy Fer at point-blank range after a corner.

There was a brief stoppage when City midfielder Yaya Toure needed treatment after taking a knock to the face, but play soon started again.

On 36 minutes, City struck the woodwork when a near-post corner was flicked on and Negredo's header cannoned back off the crossbar.

The visitors pressed again as half-time approached, with Ruddy getting down well to save a low, 20-yard strike from Stevan Jovetic.

City maintained their dominance following the restart and only a brilliant diving tackle by Olsson prevented Jesus Navas from slotting home at the far post on 55 minutes.

In a rare Norwich attack, a clever exchange between Hooper and Russell Martin saw the full-back played into space at the edge of the City penalty area, but his half-volley flew wide.

Hooper needed treatment for a foot problem after kicking Silva's boot as he tried to clear, and had to come off, as Norwich's club-record signing Van Wolfswinkel was sent on in the 67th minute.

Milner was booked for tripping Olsson, but it only interrupted the siege as Dzeko fired into the side netting following another flowing counter-attack.

Aleksandar Kolarov came on for Negredo with 14 minutes left

Navas' low cross went through the six-yard box and behind as City were again frustrated by a lack of cutting edge.

Norwich, though, almost snatched it at the death as first Redmond's cross was just too far ahead of Van Wolfswinkel and Anthony Pilkington fired just over after turning Zabelata. 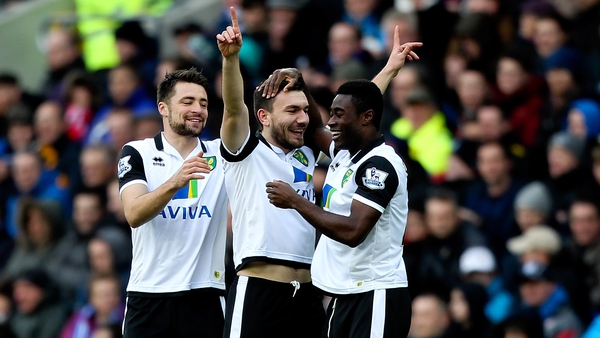