Neil Lennon suffered at the hands of Aberdeen for a second weekend running as Peter Pawlett's goal knocked holders Celtic out of the William Hill Scottish Cup.

Lennon, who was pelted with missiles by Dons fans on a spying mission, saw Anthony Stokes hand his side an early lead but Celtic failed to build on their start and went down 2-1 at Parkhead.

Fraser Forster conceded his first goal against a Scottish team since Niall McGinn netted on Aberdeen's previous visit to Celtic Park on 23 November when Russell Anderson finished brilliantly in the 38th minute.

And Pawlett struck four minutes into the second half to end Celtic's 15-match domestic winning run.

But Celtic's pressure proved too little, too late.

The Aberdeen fans appeared far from remorseful about Lennon's experience, which came when he watched the Dons beat St Johnstone in the League Cup semi-final at Tynecastle last Saturday.

Lennon was almost hit by a coin and cup of liquid thrown from the Dons support and spoke openly about his frustration and bafflement about being a hate figure on the eve of the game.

But he was greeted by loud and abusive chants from the visiting support, who were the most vocal section of a disappointing crowd, which meant Celtic did not need to open the top tier.

Georgios Samaras, brought in after Charlie Mulgrew suffered a calf knock in training, set up the opener inside eight minutes when he chipped a diagonal ball over Mark Reynolds to Stokes, who had peeled off his man.

The Republic of Ireland striker killed the ball and fired a powerful shot that Jamie Langfield could only help into the net.

Celtic continued to look comfortable without being dynamic but some sloppy play near the midway point of the half allowed Hayes a shot on the break and then almost allowed the winger to set up Adam Rooney before Efe Ambrose atoned for his own error.

The Dons kept coming forward and Rooney saw a flick diverted on to the top of the bar after Andrew Considine had headed down Robson's corner. 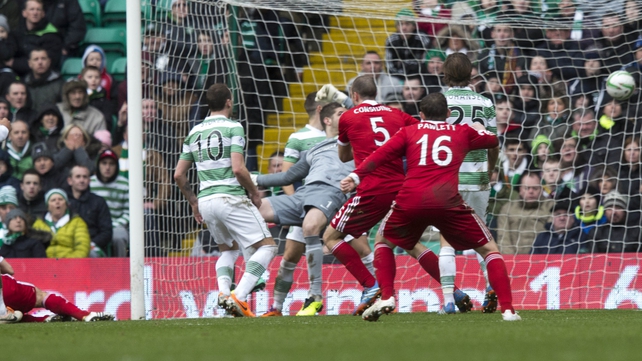 Aberdeen equalised from the same routine. Robson's corner hit off Considine's chest and Anderson was first to react with an acrobatic volley inside the six-yard box that flew into the roof of the net.

Celtic came out after the restart with more purpose but they were soon behind. Robson blocked a clearance in his midriff on the edge of the box and flicked the ball through for Pawlett to fire a left-footed shot in off the far post from eight yards.

Van Dijk angrily claimed for a handball but he missed a glorious chance to wipe out the deficit moments later when he headed James Forrest's cross over from six yards.

Aberdeen went straight up the park and Pawlett hit the post from close range after Rooney had mishit McGinn's cross.

Ambrose headed over from a free-kick by Kris Commons, who soon sliced Izaguirre's cross wide, before Leigh Griffiths received a rapturous welcome as he came on for Samaras in the 63rd minute to make his debut.

But chances were few and far between for the hosts. Stokes saw a long-range shot held before making way for Amido Balde but Aberdeen otherwise protected Langfield until Forrest twice got cutbacks in to both substitutes.

However, Griffiths shot wide from 18 yards and Balde's defected effort looped into the goalkeeper's hands.

Celtic went for broke with van Dijk going forward but Aberdeen came closest to a late goal when Rooney shot over after being played through by Hayes.