Manchester City manager Manuel Pellegrini has hit back at Jose Mourinho's claim that Chelsea are the "little horse" in the title race.

Mourinho's Chelsea drew level with second-placed City in the Premier League standings with a 1-0 victory at the Etihad Stadium on Monday but afterwards said they were still third favourites behind them and Arsenal.

Pellegrini brushed off that suggestion by pointing out that Chelsea have been one of the one of heaviest spenders of recent times.

"Maybe it is a small horse if the manager thinks like that. It can be a little horse, but very rich," Pellegrini said.

"[Jose Mourinho]  thinks if he wins he will have the merits but if he loses he does not have responsibility. It is the way he acts" - Manuel Pellegrini

It was a strong counter-reaction from Pellegrini, coming soon after Mourinho also spoke about the "dodgy" attitude some clubs - possibly City - had towards financial fair play.

It was also the first time Pellegrini had responded this season to Mourinho, with whom he has a perceived rivalry dating back to when the Portuguese succeeded him at Real Madrid in 2010.

In previous weeks he has refused to engage in the apparent mind games of the Stamford Bridge chief.

Mourinho went on to say that City remain the title favourites, but Pellegrini insists Chelsea - after beating the Citizens twice this term - cannot be written off.

"He has shown in the last two games [against us] he has a strong team with some great players,” Pellegrini said. "I think he is favourite. He thinks if he wins he will have the merits but if he loses he does not have responsibility. It is the way he acts. Everyone acts the way he thinks is better for the team.”

Mourinho today admitted that Chelsea were title contenders, and that he engaged in “mind games” to benefit his side.

Pellegrini also highlighted the title challenge of Arsenal, however, calling them favourites.

"I think it will be very close with Chelsea and Arsenal. Arsenal are the favourites because they have two points' lead in the table,” he said.

"Of the 24 games we have played, Arsenal have been top of the table for 16 or 17. They have an important advantage. I am sure the three will fight to the end for the title."

City remain above Chelsea on goal difference and will hope to hold off their challenge, and respond to Monday's setback, with victory at Norwich this weekend.

City thrashed the Canaries 7-0 when the sides met at Eastlands in November but Pellegrini expects a different game this time.

"It's a very difficult game, it is very important the way the team reacts after the defeat at home," said Pellegrini, whose efforts in January have earned him a second successive manager of the month award. "We play against a good team in Norwich, a team that tries to play, so we hope that we can win again.

"It will be absolutely different. They will want revenge for what happened here in Etihad.

"They have a good team that play good football, it is very important for us to continue playing the same way we are doing away because the last four games we won all of them." 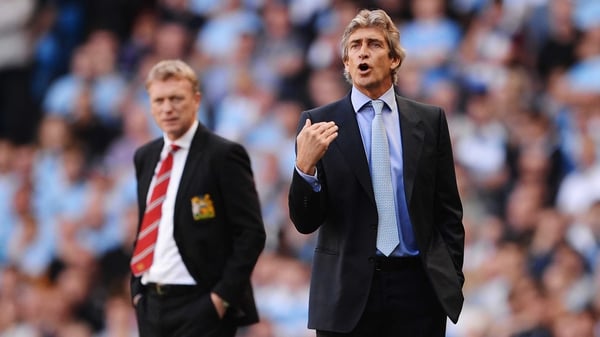