Representatives of the Italian businessman attempting to take over Leeds are insisting his two previous convictions should be regarded as 'spent' by the Football League.

League chiefs are considering the bid by Massimo Cellino, the owner of Cagliari in Italy's Serie A, to take over Leeds and whether he passes the owners' and directors' test.

Cellino received a suspended sentence in 2001 for false accounting. His representatives say a 1996 fine for fraud was overturned on appeal.

In Britain, both convictions would be regarded as 'spent' under the Rehabilitation of Offenders Act, meaning that there is no obligation to disclose them, and that the offences should no longer be held against the person in any way.

It is understood that Cellino's lawyers have presented a case to the Football League arguing that he cannot be barred from owning Leeds due to the past offences.

Nor can the fact he could face a trial after being arrested in Italy last year as part of an ongoing investigation into the alleged misuse of public funds be held against him as people are regarded as innocent until proven otherwise.

The Football League's owners' and directors' test states a disqualifying condition is "having an unspent conviction (or where the Rehabilitation of Offenders Act 1974 does not apply for any reason, having a conviction within the period that would have rendered that conviction unspent had the provisions of that Act applied) for offences including dishonesty, corruption and perverting the course of justice."

The test does not have any conditions dealing with a person under investigation for an alleged offence.

Leeds' owners Gulf Finance House Capital are now understood to be poised to open talks with another consortium after initially having agreed a deal to sell 75 per cent of the club's shares to Cellino's company, Eleonora Sport Ltd, on Friday.

But after Cellino's failed attempt to sack manager Brian McDermott later the same day, it emerged his legal representatives had been escorted from club premises on Monday.

McDermott, who stayed away from Leeds' 5-1 derby win against Huddersfield at the weekend as the club's latest takeover saga plunged into farce, reported for duties as normal on Monday morning after GFH Capital confirmed the 52-year-old had not been sacked.

He was unable to end continued speculation who will take control of the Championship club at a press conference, but it is now understood Sport Capital, whose takeover deal collapsed last Thursday, have joined forces with another British consortium, Together Leeds.

Together Leeds, which includes former Manchester United director Mike Farnan and former Hull chairman Adam Pearson, who left his position as commercial director at Elland Road in 2001, had been hoping to enter into talks with GFH Capital. 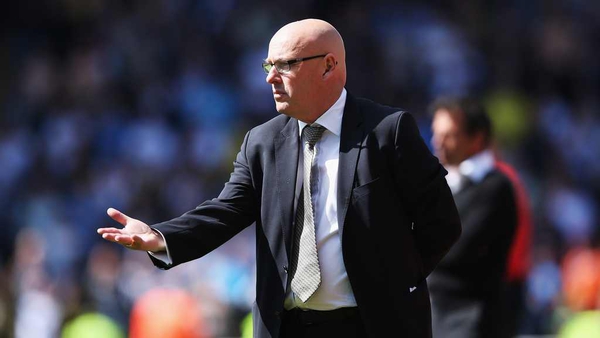