City recovered in their fourth-round tie at the Etihad Stadium thanks to a second-half Sergio Aguero hat-trick and a goalkeeping error.

At half-time their bid for an unlikely quadruple of Champions League, Premier League, FA Cup and League Cup was heading towards a shock end after Watford had raced ahead through Troy Deeney and Fernando Forestieri.

City upped the tempo after the break and levelled with two goals from Aguero before Aleksandar Kolarov put them ahead three minutes from time with a shot that squirmed through Jonathan Bond's grasp. Aguero put gloss on the scoreline in the final minute.

Pellegrini was far from impressed with his side's attitude and defending and the second-half introductions of Vincent Kompany and Pablo Zabaleta changed the game.

"Yes, of course, I was very worried,” Pellegrini said. “If you don't play with 100 per cent concentration and intensity you don't win the game. I think Watford did in the first 45 minutes and we played jogging. That way it is impossible to win.

"The whole team didn't do the things we normally do. The important thing was Watford didn't score the third goal. If they had scored the third goal the game was finished.”

Pellegrini insisted he hadn’t been surprised by the level of Watford’s performance.

"Watford didn't surprise me,” he said. “If you give professional players time and space they will make the difference. If we didn't make good pressing we were not going to have an easy game. That was what happened in the first half - and we were a disaster defending."

Pellegrini said that City had changed the tempo to make the difference.

"We changed what we did, played with another tempo, another pace,” he said. "We continued playing the way we did the whole season at the Etihad. That reaction was more important for me than what we did in the first half."

Aguero's goals took his tally for the season to 25 and the Argentinian has scored in all four of his appearances since returning from a calf injury earlier this month.

Watford boss Beppe Sannino paid tribute to his players, who made light of their Championship problems to trouble the Premier League giants.

"I am proud of my lads because today saw my team give this emotion,” Sannino said. "It is a little bit bitter because at 2-2 we were still in the game. We just couldn't manage the last few minutes.

"At the end of the first half I had this desire (to win) but I knew the game was not finished and we had to play for the 90 minutes, and more. In the second half Manchester City were unbelievable and showed us their full strength.

"I tried to change things but the quality of Manchester City is far superior than any change you can make tactically."

Sannino had no complaints about Bond, who had been given a chance ahead of Manuel Almunia.

"He is okay,” Sannino said. “I think he has to remember this day - not because of his mistake, but because he was very good today." 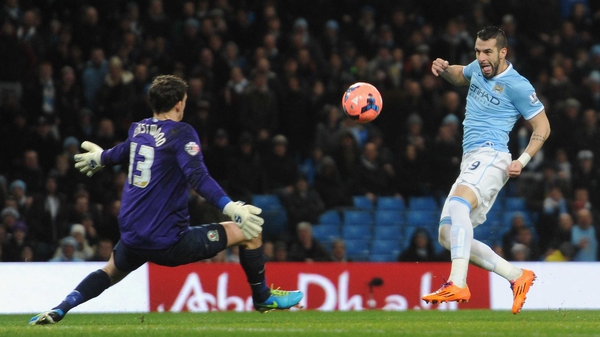