Substitute Fraizer Campbell's opportunistic strike early in the second half proved enough to book Cardiff's place in the FA Cup fifth round as they saw off Bolton 1-0 at the Reebok Stadium.

Campbell, brought on at half-time, found the net in the 50th minute, taking advantage and slotting the ball in after Wanderers goalkeeper Andy Lonergan had spilled it.

It was the second successive tie in which the striker had come off the bench to score the winner, with him having also done so in the third round when the Welsh side triumphed 2-1 at Newcastle.

It had been a poor game up to that point, and it improved to some extent after as Bolton searched for an equaliser that did not come.

Ahead of Tuesday's Premier League trip to his old club Manchester United, Cardiff boss Ole Gunnar Solskjaer made five changes to his starting line-up from the 4-2 defeat to Manchester City, with the likes of Steven Caulker, Gary Medel and Campbell being dropped to the bench.

The players coming in included first-time starter Magnus Wolff Eikrem, Andreas Cornelius and Joe Mason - one of two former Bolton loanees in the side, along with Kevin McNaughton.

The first half provided little in the way of entertainment for the spectators, who were enduring cold, wet and windy conditions.

Trotters defender Alex Baptiste threw himself in the way of an early Aron Gunnarsson shot and Eagles then saw his strike deflect wide at the other end.

Lee Chung-yong drove forward and fired off-target in the 19th minute before fashioning a cross into the Cardiff box that Mark Hudson cleared, but neither side showed any real attacking thrust.

Hudson got his head to a Peter Whittingham corner around the half-hour mark but could not finish and there was not much else of note that occurred until the final few seconds of the half, when Lee won a corner, the ball came back to him and he struck it just the wrong side of the post.

Solskjaer looked to liven up his attack at the interval, throwing on Campbell and Craig Noone for Cornelius and Eikrem, and the move paid off almost immediately.

Noone crossed, the ball came off Baptiste's head and Lonergan fumbled it, allowing Campbell the opportunity to tuck in his fourth goal in six games, and seventh of the season.

Campbell headed over soon after, and with the tempo of the contest having increased overall, Neil Danns then brought a parry out of Cardiff goalkeeper David Marshall.

Bolton continued to press and Marshall did well to dive and tip away a Baptiste cross that had deflected towards his goal, before Danns cracked a shot wide.

A cross came rapidly at Lee in the 76th minute and he could not direct his header on target.

Cardiff then came close to adding a second, with Lonergan keeping out a Kim Bo-kyung effort, before another one of the visitors' substitutes, debutant Mats Moller Daehli, sent a shot into the stand. 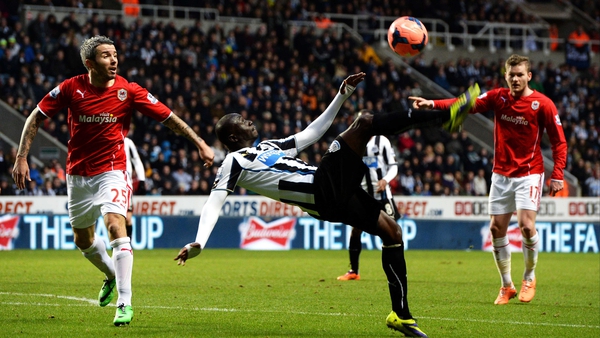