Clarence Seedorf made a winning start to life as AC Milan coach, although he had to wait for Mario Balotelli to score an 82nd-minute penalty before finally breaking Hellas Verona's resistance.

Fielding a bold attacking side in the first game of his coaching career, Seedorf saw exactly why the Rossoneri were in the wrong half of the table coming into this game.

They struggled to find a way through against a disciplined Verona side who would have been good value for a point.

However, a late penalty provided Milan with a lifeline and Balotelli took it to lift Seedorf's men up to 11th place, seven points behind the top five.

Juventus extended their winning Serie A run to 12 matches on Saturday night with a 4-2 victory over a Sampdoria side including the impressive Manolo Gabbiadini.

Arturo Vidal scored twice, including a penalty, and Fernando Llorente and Paul Pogba were also on target for the hosts. 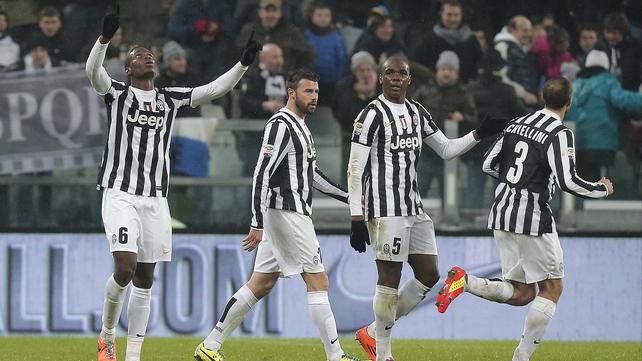 Andrea Barzagli's own goal gave the visitors hope and lively on-loan Juventus striker Gabbiadini was also on target for Sampdoria.

However, Juve picked up the three points to maintain their eight-point advantage at the top over Roma, who beat Livorno 3-0 earlier in the day.

Goals from Mattia Destro, Kevin Strootman and Adem Ljajic marked a dominant performance from the Giallorossi.

Livorno, however, failed to get going at the Stadio Olimpico and remain four points from safety after a fifth successive defeat.

Two fighting comebacks from 10-man Lazio saw the Biancoceleste edge closer to the top five and extend their unbeaten record under coach Edoardo Reja with a 3-2 win at struggling Udinese.

Antonio Di Natale broke his almost three-month scoring drought to put the Zebrette ahead with an early penalty, but Antonio Candreva levelled with a spot-kick of his own just after the hour-mark.

Lazio, who had been reduced to 10 men before that equaliser when Ogenyi Onazi picked up two quick yellow cards, then fell behind again when Emmanuel Badu scored midway through the second half.

However, an own goal from Andrea Lazzari and a last-gasp Hernanes effort made it seven points from three games for Reja.

Alessandro Matri made a dream debut and Catania coach Rolando Maran a dismal return as Fiorentina thrashed the Sicilians 3-0 to reduce the arrears on third-placed Napoli to three points.

Matri, who joined the Viola from AC Milan in midweek, scored twice in the first half after an opening goal from Matias Fernandez put Vincenzo Montella's men on their way to victory.

The on-loan Milan striker left the action early in the second half having done enough to earn Fiorentina a win, which leaves Catania rooted to the foot of the table.

Giacomo Bonaventura's strike midway through the second half was enough for Atalanta to claim a 1-0 win against Cagliari.

The 24-year-old earned Stefano Colantuono's men all three points after they survived a first-half storm which saw Cagliari hit the woodwork twice.

Victor Ibarbo was denied twice by the post and he let his frustration get the better of him late on to earn a red card and compound Cagliari's misery.

A late Rolando Bianchi goal denied Napoli victory at the Stadio Dall'Ara as 10-man Bologna picked up a crucial point in a 2-2 draw.

Bianchi gave a bright Bologna side the lead just before half-time, but it was a different story in the second 45 minutes.

Gonzalo Higuain and Jose Callejon turned the match around, but it was Bianchi who was to have the final say shortly after Panagiotis Kone saw red, grabbing a last-gasp equaliser.

Antonio Cassano inspired Parma to an injury-time victory as they came from behind to make it three straight Serie A wins with a 2-1 success at Chievo.

The visitors trailed to Alberto Paloschi's 15th-minute goal but Cassano finished with aplomb to draw them level.

And the Italy striker turned creator to set up a 93rd-minute winner for Alessandro Lucarelli, which left Chievo in trouble towards the bottom of the table.

Antonelli headed home in the 83rd minute to drop Inter further off the pace in the hunt for Champions League qualification.

Ciro Immobile and Matteo Brighi were on the mark as Torino inflicted a 2-0 defeat on relegation-threatened Sassuolo.