However, the 5-3 scoreline by no means tells the whole story as it was a stuttering performance interspersed with moments of predatory brilliance which saw the Reds squander a 2-0 lead.

But with two goals from Suarez taking his tally to 22 in 16 league games and Sturridge scoring his 12th of the season on his first appearance since November 23 because of an ankle sprain Brendan Rodgers' side had enough firepower to see off their hosts.

The pair had been separated for nine matches, during which time Suarez won player of the month for December after a Premier League record 10 goals, but they immediately reconnected once Sturridge was introduced in the 66th minute.

Liverpool's principal owner John Henry tweeted "What a dynamic duo!" and it was difficult to disagree.

With such a poor record at the Britannia it was criminal that Liverpool gave up such a significant advantage handed to them by their hosts.

They were ahead after just five minutes when Raheem Sterling's mis-hit cross landed at the feet of Aly Cissokho and the left-back let fly from 25 yards.

His shot, like his spell on loan from Valencia, was not worth much of a mention as it was destined to career well wide before the intervention of Shawcross produced the breakthrough.

Stoke, aside from a succession of corners, did not appear to be causing many problems other than through their physical approach, with Martin Skrtel and Shawcross engaging in some full on wrestling while Jack Butland connected with Suarez's head as he punched the ball clear.

But Suazez kept his head to double the lead in the 32nd minute as he capitalised on two defensive errors as Stoke failed to deal with Skrtel's long punt forward.

Marc Wilson's weak header put Butland under pressure and as the goalkeeper came out to collect Shawcross nipped in front to nick the ball away from him, giving Suarez just the opening he needed to slide a shot inside the near post from a tight angle.

Liverpool appeared to be cruising until their own defensive lapses cost them equally as dearly in the six minutes before the interval.

First Marko Arnautovic was given too much time to cross from the left and Peter Crouch cleverly created just enough space up against Kolo Toure to have the freedom to plant a header past Simon Mignolet.

Coutinho's volley straight at Butland from Suarez's cross was a brief retort as Liverpool's wobbles increased ten-fold and that was exemplified by their concession of a second.

Jordan Henderson's poor lay-off sold Steven Gerrard short and the Reds captain slipped as he tried to make up lost ground, allowing Adam to stride forward and, with Skrtel opting not to close him down, lash in the equaliser from the edge of the area.

The wind was taken out of Stoke's sails by the 51st-minute award of a penalty when Wilson, having made a hash of trying to control the ball, clipped Sterling in the area.

It was slight contact but enough to cause the winger to lose his footing and Gerrard drilled home from the spot.

Stoke felt they should have had a penalty of their own when Arnautovic's shot from Adam's short free-kick hit Suarez with his arms clutched to his chest but Taylor infuriated the Britannia Stadium more by doing nothing.

Within five minutes of coming on Sturridge set up the fourth, racing from halfway, drawing the Stoke defence and then slipping a pass for Suarez to curl a shot past Butland and inside the far post.

It should have been game over but Walters had a header well saved by Mignolet before the goalkeeper then let the forward's shot fly through his hands to pull it back to 4-3.

However, Suarez and Sturridge had the final say with the former passing to his partner who was brilliantly denied by Butland's reflex save but reacted quickest to fire home the rebound. 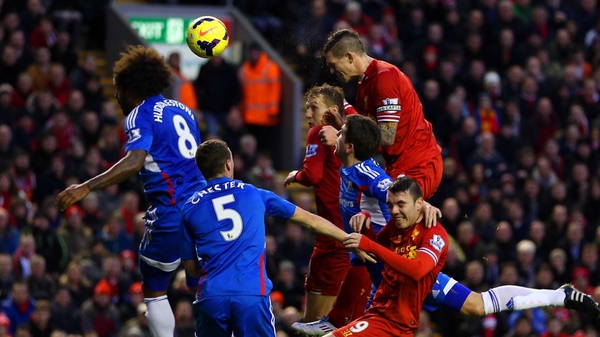