Ten-man Manchester City were forced to settle for a replay after Scott Dann's goal secured a 1-1 draw for Blackburn in their FA Cup third-round clash at Ewood Park.

City had looked to have broken the Championship side's resistance after Alvaro Negredo put them ahead just before half-time.

But Dann replied early in the second half after a mistake by Costel Pantilimon and City were left hanging on after Dedryck Boyata was sent off.

Rovers' performance was an uplifting one after all their troubles of recent years and the atmosphere as they chased a late winner reminded the club of what they have missed since relegation.

City, with a Capital One Cup semi-final against West Ham coming up next Wednesday, made seven changes and perhaps paid the price with a loss of intensity.

Rovers, despite leaving star striker Jordan Rhodes on the bench, were positive and Rudy Gestede, fresh from making his loan from Cardiff permanent, troubled Joleon Lescott early on, although his penalty appeal was rejected.

City slowly began to take control of the game midway through the first half and Robinson twice came out bravely to thwart Negredo.

Fernandinho shot straight at Robinson from outside the box and Silva spurned a glorious chance when he scooped over from a Boyata cut-back.

Rovers pushed again before the break but Gestede failed to connect with a headed chance and Chris Taylor shot over.

City punished them by snatching the lead themselves on the stroke of half-time as Dzeko flicked on a Silva corner and Negredo turned in his 15th of the season from close range.

Rovers came back fired up and earned reward as they grabbed an eqauliser in the 54th minute.

Gestede rose high to meet a Ben Marshall corner with a powerful header and Pantilimon could not hold it. Dann rushed in to sweep past him from close range.

Jesus Navas came on for Negredo and brought another fine save out of Robinson, who also spilled but regathered another effort from Dzeko.

"I would be disappointed if we lost and were out of the FA Cup but we are not out and we must play at home." - Manuel Pellegrini

Blackburn were undeterred and sensed an opportunity to pull off a shock.

They sent on the additional firepower of Rhodes and DJ Campbell with nine minutes remaining and threw everything they could at City.

City's cause was not helped as Boyata upended Campbell to earn his second yellow card but they managed to hang on.

Pellegrini denied his team were fortunate to still be in the competition.

He said: "We were not lucky. It was a very close match and I think we had more clear options than Blackburn but we played against a very strong team who were at home.

"They had a lot of motivation and that is normal when you have a Championship team playing against a Premier League team.

"I'm not disappointed. Of course, everyone wants to win all of the games but we were playing against a very strong team at home.

"I would be disappointed if we lost and were out of the FA Cup but we are not out and we must play at home."

There were claims that Pellegrini intended to take off Edin Dzeko with the score 1-1 in the second half but the wrong player's number was held up and Negredo was substituted instead.

Asked if a mistake occurred, Pellegrini said: "No."

Pellegrini was not critical of goalkeeper Pantilimon, who returned to the side for the tie after recently losing his place to Joe Hart.

The Chilean said: "I will analyse the game with the players, as a collective team.

Rovers manager Gary Bowyer praised his side's efforts and singled out former England goalkeeper Paul Robinson, playing his first game in 13 months after a blood clot on his lung, who made some crucial saves.

"It was an absolutely phenomenal effort from our lads playing against a world-class team and they restored some pride in the club today," he said.

"It would be wrong to single out individuals but on this occasion, and the fact that Paul has not played for so long, he made some crucial saves for us in the second half and his experience helped us massively." 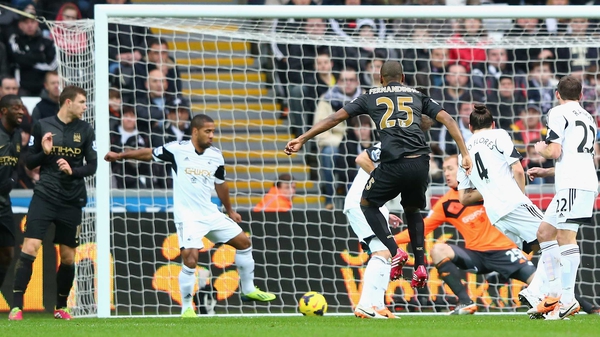