Chelsea's strikers failed to score a single league goal away from home last year, but Fernando Torres ensured that hoodoo would not extend into 2014 as Southampton were overcome 3-0 at St Mary's.

The west Londoners have not been firing on all cylinders since Jose Mourinho returned to Stamford Bridge, yet the ruthless edge that epitomised his first spell continues to shine through.

The Blues rode their luck at times in miserable conditions on the south coast, but the hosts could have no arguments with the eventual 3-0 scoreline in this Barclays Premier League match.

There were few chances of note in the opening 45 minutes, with last-ditch blocks and wayward finishing keeping the score goalless.

Saints wasted decent chances during a penalty-box melee in the early minutes of the second half - missed opportunities they were made to rue as Chelsea wrestled control of the game.

Oscar, who had just been booked for diving, saw a deflected cross from the left come back off the post and unmarked Torres nodded home - the first away league goal by a Chelsea striker since the Spaniard netted on December 8, 2012, against Sunderland.

It was a goal that capped a fine performance for the Spaniard and one added to by substitute Willian, firing low past Kelvin Davis after collecting a ball from Oscar in the 71st minute.

The Brazil international, introduced as 53rd minute substitute, added extra gloss to the scoreline late on, firing low past Davis to wrap up Chelsea's fourth win in five matches and condemn Saints to back-to-back home league defeats for the first time under Mauricio Pochettino.

Mourinho, who helped persuade Pochettino to take the St Mary's hot-seat, made six changes for his side's fourth match in 10 days, with the quality of those alterations highlighted by the fact they were signed at a cost of £131million.

Those fresh legs helped Chelsea to fly out of the blocks, with Torres and Andre Schurrle threatening early on.

However, during that passage of play, there was a nasty collision of heads between Jose Fonte and Dejan Lovren, leading to a break in play as the latter received treatment.

The time appeared to help Saints and, after Davis dashed off his line to smartly block off Ramires outside the box, Pochettino's men began to threaten.

Adam Lallana had Saints' first chance of note in the 17th minute, jinking past a Chelsea defender but seeing Ashley Cole block.

Davis again came off his line to thwart a Chelsea attack, this time Eden Hazard the man denied, before Cesar Azpilicueta threw himself in front of a close-range Lallana strike after Calum Chambers' low cross caused problems.

Ramires' mazy run and strike not been tipped over impressively by Davis when Chelsea returned to the attack, although there was to be no first-half goal.

Nathaniel Clyne replaced Luke Shaw for a second half which began with the home side wasting a chance to open the scoring.

Having just been booked, Ramirez swung in a corner that resulted in a penalty-box melee in which Lovren and Fonte had attempts blocked, with the latter unsuccessfully claiming handball.

Referee Martin Atkinson was soon called into action, though. Put through on goal by Hazard, Oscar was adjudged to have taken a tumble when looking to round goalkeeper Davis. The Chelsea man was booed but quickly made amends, sending in the cross from which Chelsea broke the deadlock.

The playmaker's ball took a deflection off Chambers, taking the ball onto the post and Torres reacted quickest to bundle home the rebound.

Chelsea were on top, though, and Oscar, impressing since his 53rd-minute introduction, squared a pass to countryman and fellow substitute Willian, who fired a low strike into the bottom right-hand corner to make it 2-0.

Saints were left chasing shadows for the remainder of the game and it was no surprise when Oscar completed the scoring with eight minutes remaining.

A quick break saw Hazard play through the Brazilian, who fired past Davis at his near post to wrap up a comprehensive victory.

Clyne was booked for a coming together with Azpilicueta as the match came to a close, with Ramirez curling wide in stoppage time. 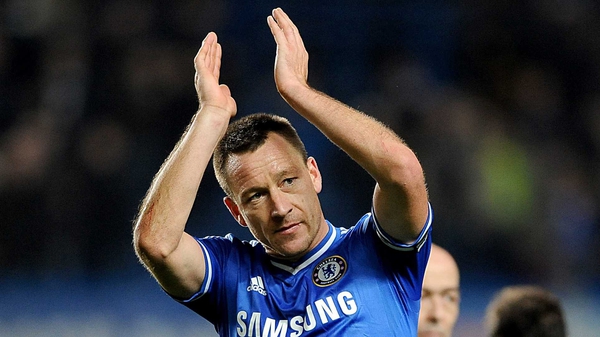 John Terry: Chelsea have their identity back