Leaders Celtic stretched their unbeaten run in the Scottish Premiership to 16 games with a 2-0 win over bottom side Hearts at Parkhead thanks to goals from Kris Commons and James Forrest.

The Hoops had thrashed the administration-hit visitors 7-0 in their Scottish Cup clash at Tynecastle at the beginning of the month - with Commons scoring a hat-trick - and Jambos boss Gary Locke was keen to ensure there would be no repeat.

The Gorgie side were set out to keep a clean sheet although goalkeeper Jamie MacDonald had to make several saves in the first half, the best from a Joe Ledley header.

However, the Hoops remained patient after the beak and got their reward when Commons scored in the 63rd minute with a powerful drive and the 30-year-old also cleared off the line near the end before Forrest, on for Nir Biton for the start of the second half, grabbed a second at the end.

While Celtic's inexorable march to the title continues steadily, there seems no end to the struggle of the Gorgie club to avoid relegation, despite a valiant effort. 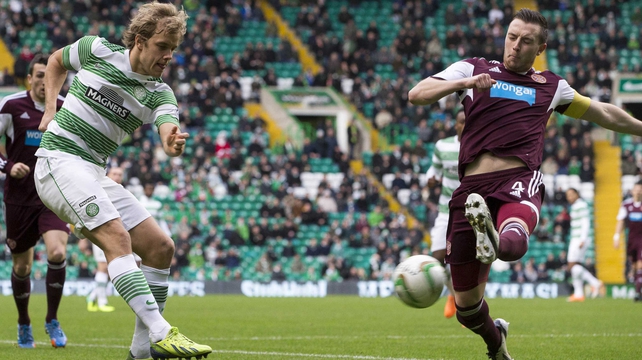 Hoops manager Neil Lennon made one enforced change to his side with right-back Darnell Fisher coming in for Sweden international Mikael Lustig, who faces four months on the sidelines after undergoing a double hip operation.

Given their cup humiliation, there was no surprise that the Tynecastle men lined up in defensive mode and in the early stages Celtic struggled to pierce the maroon wall.

In the eighth minute MacDonald rushed from his goal to thwart Commons and when the Edinburgh side failed to deal with the resulting corner, the Jambos keeper reacted brilliantly to push Anthony Stokes' close-range toe-poke on to the bar, before they eventually cleared.

MacDonald was next called into action in the 17th minute when he dived low to his left to push Commons' volley from the edge of the box past the post for a corner, which again, came to nothing.

The Gorgie keeper was far from under siege but he dealt well with an angled drive from Hoops striker Teemu Pukki as the chances mounted.

Hearts' forays up the pitch were few and far between.

Celtic defender Virgil van Dijk lost possession to Callum Paterson midway through the first half but the Gorgie side's lone-striker lacked the confidence to go through himself and was eventually crowded out.

The home side looked certain to take the lead in the 35th minute when Commons' inswinging cross from the right was met by Ledley three yards from goal but MacDonald made a fantastic block from the Welshman's header, with the Jambos escaping again.

The procession towards the Hearts goal continued after the break.

In the 56th minute van Dijk headed a corner from Commons over the bar before MacDonald, in inspired form, made another great save from the former Derby and Nottingham Forest midfielder's powerful drive.

There was little surprise that top scorer Commons, behind most of Celtic's good play, was the man who eventually got the breakthrough.

As the Hoops players swarmed around the Jambos penalty area once more, skipper Scott Brown picked him out with an incisive pass and he wasted no time before rifling a shot across MacDonald and into the far corner to the relief of the home crowd.

As the champions stepped up the pressure, MacDonald pushed a close-range effort from Ledley on to the post before making yet another save from Commons.

With two minute remaining Commons proved his worth at the other end when he popped up at his own post when defending a corner to prevent a Dylan McGowan header creeping in for a shock equaliser.

However, there was still time for Forrest to end a Celtic breakaway by beating McKay with ease before sliding the ball past MacDonald for number two.

Hoops assistant Johan Mjallby believes the Celtic players and management need "new targets" after being knocked out of the Champions League - the first of which is to go another four league games unbeaten.

He said: "Obviously there is not going to be any more European football this season, so we have to set new targets and incentives for the players.

"Being unbeaten is going to be very important for us and obviously right now, the target is to go 20 games unbeaten and then we take it from there.

"You always look for progress and to do better. Being knocked out of Europe was disappointing but the first target was to get there and hopefully get the same run as last year (last-16 appearance) - but it is quite hard because you are fighting against teams who have bigger financial muscle." 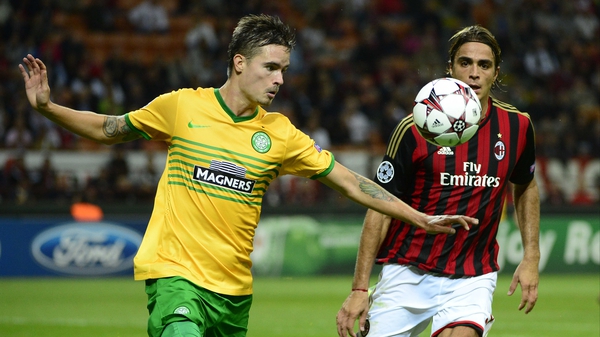