Manuel Pellegrini moved closer to a first trophy in English football as Manchester City eased past Leicester into the Capital One Cup semi-finals on Tuesday night.

Pellegrini made eight changes for tie at the King Power Stadium but they still proved too strong for the Sky Bet Championship side and swept to a 3-1 victory.

Edin Dzeko pressed his case for a regular start in the absence of injured Sergio Aguero with two goals after Aleksandar Kolarov had opened the scoring with a brilliant free-kick.

City had numerous other chances but found Foxes goalkeeper Kasper Schmeichel in fine form against the club at which he began his career.

City were 3-0 up by 53 minutes but Leicester - backed by vociferous home fans who were also entertained by X Factor winner and new local star Sam Bailey at half-time - at least finished strongly.

They claimed a consolation through a deflected Lloyd Dyer strike and substitutes Matty James and Jeff Schlupp both worked the restored Joe Hart in the closing minutes.

Pellegrini said: "It was very important for the team to continue in the Capital One.

"We knew it was not going to be an easy game because Leicester are a very good team, they were playing at home and were motivated.

"That is why I think it was a very professional performance."

The downside for City was the loss of defender Pablo Zabaleta with a hamstring injury early in the game.

With Micah Richards already sidelined, City could now have a problem at right-back in the weeks ahead.

Pellegrini said: "It is the only bad thing of this game.

"I don't know (how long he will be out) but, for sure, on Saturday he will not be fit."

City had also only named six substitutes after Stevan Jovetic pulled out through illness before kick-off and they had no other players in their travelling squad.

Jovetic has made just five appearances since signing in the summer but will hope to be fit to face Fulham at the weekend.

Dzeko will also hope he has done enough to retain a place.

Pellegrini said: "I have always said Edin Dzeko is a very important player.

"He hasn't been playing normally in the 11 starting because (Alvaro) Negredo and Aguero are playing well, but every time he has played he has played very well."

He said: "We were beaten by a very good side but I think we were punished severely for one or two mistakes.

"I would have liked us to keep it tighter for longer.

"I think the players deserve a bit of credit for trying to put them under pressure and we did get a goal back.

"It would be very easy to allow a side of Man City's quality to totally dominate and rub salt in the wounds but I think the players kept going.

"That was important but we are still disappointed." 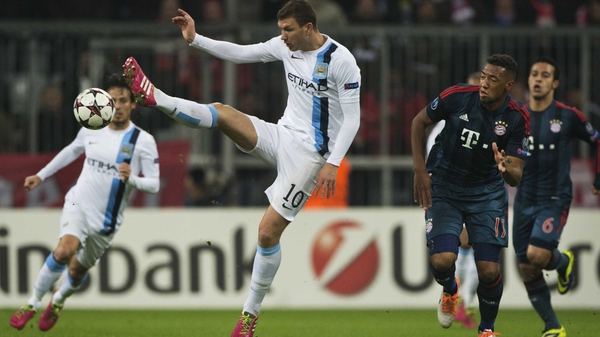