Stoke and Cardiff stayed locked together in the Barclays Premier League table after an uninspiring 0-0 draw at the Britannia Stadium.

The teams were separated by only three goals before the match and that was the way it stayed, with both sides struggling to create meaningful chances.

Stoke boss Mark Hughes had called for a response from his side following their 4-0 defeat by Everton at the weekend, and the Potters were at least much more solid defensively.

But the Welshman would still surely look upon the result as two points dropped, especially given they had ended an eight-match winless Premier League run in their previous home match against Sunderland.

Stoke did have the ball in the net right at the end of the first half but Geoff Cameron had certainly strayed offside and there were no complaints.

Oussama Assaidi had previously had the best chance of the half while Asmir Begovic produced a smart stop from Jordon Mutch.

Cardiff had a good shout for a penalty early in the second half when Fraizer Campbell went down but referee Michael Oliver waved play on.

Stoke midfielder Charlie Adam, meanwhile, could count himself fortunate not to be shown a second yellow card on at least one occasion.

Cardiff youngster Declan John came closest to finding a winner late on and there were boos at the final whistle from the home fans.

Hughes made two changes after the hammering at Goodison Park, with Jonathan Walters' run of 102 consecutive Premier League starts ended by a thigh problem.

Former Barcelona defender Marc Muniesa stepped in for the injured Robert Huth at the weekend but he was back on the bench with Marc Wilson preferred alongside Ryan Shawcross.

Marko Arnautovic made a surprise return from a hamstring strain while Cardiff boss Malky Mackay gave only a second Premier League start to 18-year-old full-back John.

The first 20 minutes featured plenty of huffing and puffing from both sides but no real chances.

The best opening fell to Shawcross, who got his head on a Adam corner, but his effort was well wide.

Begovic had to be alert in the 23rd minute to clear a corner under real pressure but it was Stoke who were offering most of the goal threat, such as there was.

Approaching the half-hour mark the hosts had their best spell of the match.

First Adam turned well on the right and produced a cross that Peter Crouch felt he was blocked from getting to by Kevin Theophile-Catherine.

Oliver, though, saw it the other way and gave a free-kick to Cardiff.

Moments later a fine ball from Arnautovic picked out Assaidi, who had run in behind the Cardiff defence but could not get the ball under control before David Marshall came out to block.

Adam was then the creator again with a cross for Crouch but he was sandwiched out of it by two Cardiff defenders and showed his frustration by attempting to scoop the ball in with his hand.

Begovic had been largely untroubled but in the 40th minute Don Cowie's corner picked out Mutch and his forceful header was pushed away by the Stoke keeper.

Stoke did have the ball in the net just before half-time after Assaidi and Crouch diverted Arnautovic's cross to the feet of Cameron.

The defender had popped up surprisingly in the middle of the box and he flicked the ball past Marshall but he was clearly offside.

At half-time Stoke chairman Peter Coates accepted the Freedom of the City of Stoke-on-Trent on behalf of the club along with the Queen's Royal Lancers in a ceremony on the pitch.

The Potters are celebrating their 150th year, but this was certainly not shaping up to be a match that would be remembered.

Cardiff had a strong spell at the start of the second half, and Campbell looked unfortunate not to be given a penalty for a tangle with Wilson.

The striker was at the centre of things again when Peter Whittingham was fouled 25 yards out.

Campbell hit the deck after appearing to be pushed in the wall by Adam, who was booked in the first half, but it was the Cardiff man and Crouch - who swung an arm towards Campbell - who were shown yellow cards.

At the other end, Crouch was again penalised when he felt he was being held in the box, this time by Ben Turner, while in the 68th minute the striker did get his head to a cross but nodded over the bar from Assaidi's delivery.

The home fans became increasingly frustrated as Stoke went in search of a breakthrough that would not come.

Substitute Stephen Ireland tried to pick out a team-mate instead of shooting, and the midfielder then blazed over from the edge of the box after Marshall had pushed away Adam's free-kick.

But it was the visitors who almost found a way through in injury time, teenager John drilling a shot towards the bottom corner that was well saved by Begovic. 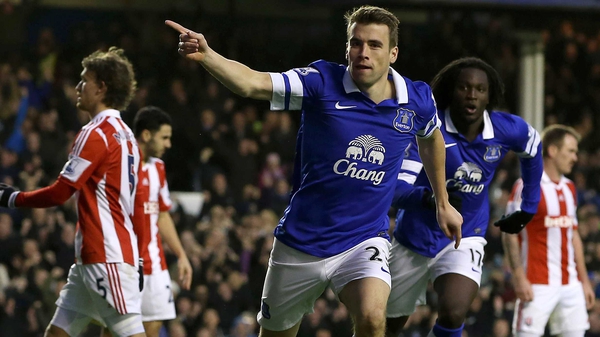