Samir Nasri struck twice in the second half as Manchester City overcame Swansea 3-0 for another ultimately comfortable home win in the Barclays Premier League.

Swansea had impressed after falling behind to an early Alvaro Negredo free-kick at the Etihad Stadium but Nasri's double killed off their spirited resistance.

Nasri, arguably enjoying his best spell of form since joining the club, went close to a hat-trick when he curled an effort wide five minutes from time.

Victory lifted City to third in the table and maintained their 100 per cent home record.

Swansea were left to rue a missed chance just before the break when Jonathan de Guzman should have equalised but shot over.

Costel Pantilimon, again preferred to Joe Hart in goal, had earlier saved twice from Jonjo Shelvey to do his hopes of continuing in the side no harm.

Hart might have hoped to feature after playing in the Champions League in midweek but, aside from Joleon Lescott replacing the injured Matija Nastasic, City fielded the side that thrashed Tottenham 6-0.

City looked keen to go on the rampage again as they raced out of the blocks with Sergio Aguero charging through and shooting at Gerhard Tremmel inside the first minute.

Tremmel - selected as Michel Vorm continues to recover from the effects of a knee injury - was in action again as Negredo forced him to tip around the post with a long-range shot.

When Negredo was fouled outside the area and got up to clip home the resulting free-kick after eight minutes, the deluge Spurs experienced was expected to head Swansea's way.

But the Welsh side, who had appeared overrun in the opening minutes, responded well and confidently took the game to the hosts.

Former Liverpool midfielder Shelvey was at the heart of a lot of their slick passing game and twice forced Pantilimon to save with shots from distance.

Swansea continued to dominate possession but City threatened on the counter-attack as Nasri slipped in Aguero, who shot at Tremmel.

Martin Demichelis then headed against the crossbar from the resulting Nasri corner but Swansea did not lose their composure.

Both sides had penalty appeals as Pablo Hernandez claimed to be pulled back by Demichelis and Aguero went down under a Jose Canas challenge but referee Mark Clattenburg was convinced by neither.

De Guzman shot at Pantilimon and spurned an even better chance to equaliser when he fired over just before the interval.

The Dutchman set alarm bells ringing in the home defence as he turned Demichelis inside out on the edge of the area but then scooped over the target as he closed in on Pantilimon.

City appeared to have heeded the warnings as they returned confidently after the break with Aguero particularly menacing.

The Argentinian was booked after directing a Navas cross at goal with his hand, although it was not clear that he was deliberately trying to emulate his former father-in-law Diego Maradona's most infamous act.

Aguero was back doing what he does best moments later as he brilliantly skipped away from one challenge to take the ball around Tremmel, but he could not supply the finish.

He took a bang to the head for his troubles as he collided with Dwight Tiendalli but he was soon back on his feet for a corner and watched as Negredo nodded over.

City's second finally came just before the hour as Yaya Toure strode forward in trademark fashion to find Nasri inside the area.

The Frenchman still had much to do but the defence could not touch him as he ran across goal and fired low into the bottom left corner.

City almost had a third when Toure found Aguero and Swansea's half-clearance fell to the inrushing Pablo Zabaleta but the full-back shot over.

But there was little respite for the Swans and Zabaleta instead turned to a creator's role by rushing onto a James Milner throughball and pulling back for Nasri to tuck home after 77 minutes.

The former Arsenal playmaker, sensing a hat-trick, curled just wide and Fernandinho shot over in the closing moments. 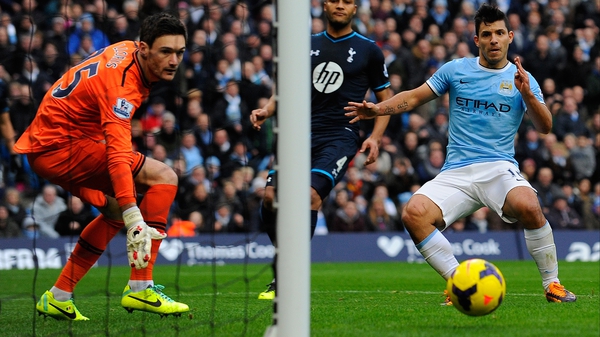