Sweden coach Erik Hamren said he and captain Zlatan Ibrahimovic were coping well with the pressure of knowing they must overturn a 1-0 deficit in tonight's World Cup play-off second leg against Portugal.

It is likely to be the 32-year-old Ibrahimovic's last chance of making it to the finals and with Hamren's contract running out at the end of the year, the coach knows defeat will spell the end of his tenure.

"It's happened to me a few times before as a club coach, when you know that if we lose a game there's not much left of the job," Hamren told reporters.

"But I'm not thinking about that one bit. My focus is on succeeding and if we do succeed we don't need to discuss it."

Asked if it was possible to heap too much pressure on Paris St Germain striker Ibrahimovic trumping Portugal ace Cristiano Ronaldo, Hamren said his player could handle it.

"He's been at this level for many, many years and for us it's not Ronaldo v Zlatan it's Portugal v Sweden," the coach explained.

"They can play more for the result, they have an advantage in that"

Hamren said Sweden would have to attack more than they did in the first leg on Friday, a match decided by a brave diving header from Ronaldo, but also show a measure of caution.

"We need to score, that's for sure," the coach added. "They can play more for the result, they have an advantage in that.

"We meet a really good team with really good international players so we can't start the match and just go forward and have the ambition to score easy and early because then they're going to punish us quickly."

The Sweden squad have practised penalties in case the teams finish level on aggregate.

"It's a mental thing of course and if it's been a long time then they need to have done it before the game."

"It's easy to do in training but when you're out there in front of 60,000 people and everything can be won or lost, it's difficult," he said.

Asked if he would be prepared to take the fifth and final penalty that might send Sweden through to the World Cup in Brazil in June, Wernbloom laughed.

"If you ask me now I would say 'no' but when you're out there you never know. We'll see," he said. 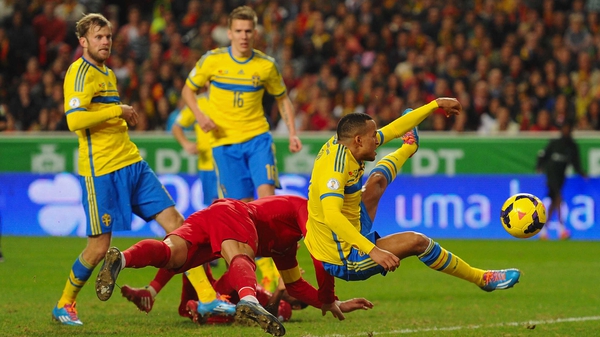