No team has ever overturned a 2-0 first-leg deficit in a European World Cup playoff but France coach Didier Deschamps believes his team can turn the tide despite the disastrous start to their tie against Ukraine.

"It was just the first step. There is a second step," Deschamps said after his side’s shock defeat in Kiev.

Ukraine were the most physical side and Deschamps felt it went over the top on occasions.

"We struggled because they put a lot of commitment into the game," he said.

"They committed a lot of fouls, they were very aggressive."

Ukraine coach Mykhailo Fomenko said before the game he had a "recipe" for victory and one of the ingredients was clearly to man-mark Franck Ribery, who was a shadow of his usually brilliant self.

"Obviously he was under great scrutiny," a stunned-looking Deschamps said.

The France coach, who skippered Les Bleus to their 1998 World Cup and Euro 2000 titles, refused though to surrender halfway through the tie.

"I want the fans to believe in our team because we still have a second game to play," he said, hoping the often fickle Stade de France crowd gets behind his men on Tuesday.

Ukraine will be without two of their defenders in the return leg with Oleksandr Kucher and Artem Fedetskiy missing through suspension.

"We have to make another recipe for the second game in Paris as this one is no longer valid," Fomenko said, well aware that France will have to be more eager than on Friday.

"It would be great to go to Brazil but we need to wait a bit."

France beat Ireland in a play-off to qualify for the 2010 World Cup following a controversial goal, which should have been ruled out for a Thierry Henry handball. 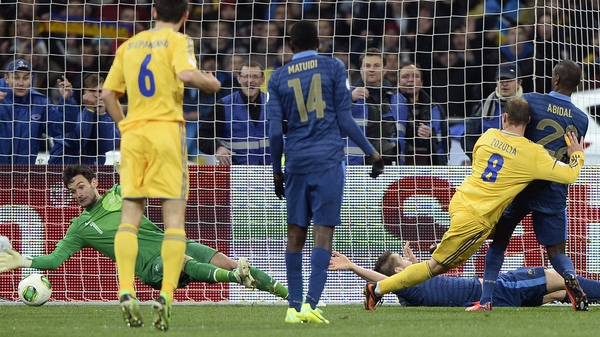 World Cup play-off round-up: France on the brink after defeat in Ukraine