Samuel Eto'o scored twice as Chelsea took another step towards a place in the knockout stages of the Champions League with a 3-0 victory over Schalke in Group E.

In the absence of leg injury victim Fernando Torres, who scored twice in the 3-0 win in Gelsenkirchen two weeks ago, Eto'o stepped up as the 2012 European Champions moved on to nine points, three clear of nearest rivals Schalke in the standings with two games to play.

Responding to Saturday's loss at Newcastle which ended a six-match winning run, Jose Mourinho made six changes as Chelsea returned to Stamford Bridge in the Champions League for the first time since September's loss to Basle, when they relinquished their near-ten-year, 29-match unbeaten home run in the group stages of Europe's elite competition.

Since that defeat, the Blues had won at Steaua Bucharest and Schalke as part of a run which Mourinho felt might have led to complacency at St James' Park.

The Portuguese demanded a proactive approach, but it was Schalke who started the better before Chelsea got a lucky break after 31 minutes.

Eto'o, who dispossessed Cardiff goalkeeper David Marshall as he bounced the ball last month to set up Eden Hazard, ran at Timo Hildebrand as the Schalke stopper prepared to fire downfield. Instead Hildebrand kicked it against the striker and saw the ball go into his own net.

There was nothing lucky about the second as Eto'o, previously a Champions League winner with Barcelona and Mourinho's Inter Milan, converted clinically.

Eto'o likes playing against Schalke - he scored his first Champions League goal against the Germans, for Real Mallorca - but there was to be no hat-trick as Ba replaced him 13 minutes from time before striking his first goal of the season to seal victory.

The Blues, who play West Brom on Saturday, suffered the ignominy of becoming the first holders to exit the Champions League at the group stage last term, but now face Basle away and Steaua at home with one foot in the next round. 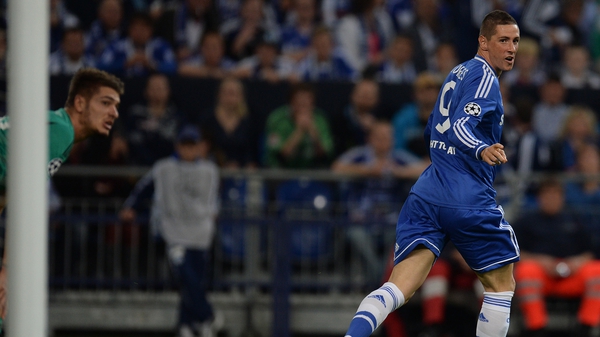