By Ed Leahy at the Aviva Stadium

Super-sub Danny North grabbed a brace to lead Sligo Rovers to FAI Ford Cup glory as the Bit O’Red beat Drogheda United 3-2 in a five-goal thriller at the Aviva Stadium.

Drogheda opened the scoring in the 13th minute with a well-taken Paul O’Conor strike following a pitch-length counter attack.

But North arrived into the cup final with 20 minutes remaining and scored twice within six minutes to put Sligo 2-1 ahead.

Ryan Brennan equalised in the second minute of stoppage time but Mick Cooke’s side were to suffer their third cup final defeat of the season as Anthony Elding blasted home the winner with four of the eight additional minutes played.

But Drogheda came to press and their energy was evident as early as the fourth minute with Paul O’Conor putting great pressure on the Sligo defence as they tried to play the ball out from the back. 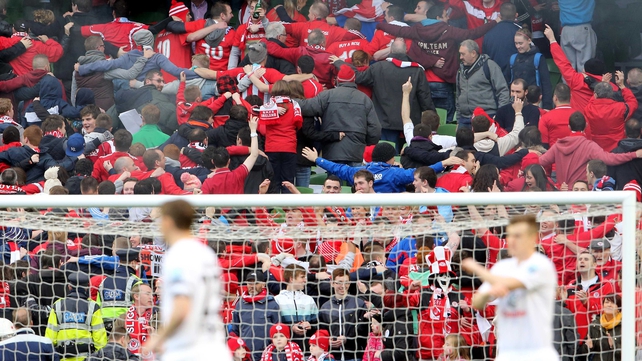 That in-your-face style was to lead to the first chance of the game after Gavin Peers was rushed with his back pass as he gave away a corner.

The set-piece was cleared but Gavin Brennan latched onto the ball and tried his luck from distance. It was far from his best as the ball sailed high and wide.

Sligo’s best chance from the opening exchanges came from Kieran Djilali who was played in after some good link-up play from the aerial excellence of Elding and Aaron Greene. The former Crystal Palace man raced into the box but was stretching for the ball and he mis-cued the shot wide.

The game burst into life in the 13th minute as Sligo had a half-shout for a penalty, however, Mick Daly’s challenge on Greene was deemed legal by referee Paul Tuite.

A corner was the consolation but a minute later Sligo were picking the ball out of the back of their own net after a textbook counter-attack from Mick Cooke’s well-organised Drogheda.

Ryan Brennan got on the ball in the middle of the park and cut back inside two Sligo players to allow his team-mates get up with the play.

David Cassidy burst past and was played in down the inside-left channel before feeding the over-lapping Shane Grimes who had run the length of the pitch to join in the attack.

Grimes got to the ball on the by-line and pulled a super pass back across the box into the path of the arriving O’Conor who made no mistake to hammer the ball home.

Sligo were shell-shocked and Drogheda continued to dictate the play and were nearly in on goal again in the 19th minute as O’Conor lifted a great ball over the top for Gavin Brennan, but the long leg of the retreating Jeff Henderson prevented a clear goalscoring opportunity.

Twenty-six minutes had elapsed before Sligo had their first real chance in front of goal and it was created as a result of some excellent play by Kieran Djilali who fed an inch-perfect pass into the path of full-back Iarfhlaith Davoren who had burst down the left flank. 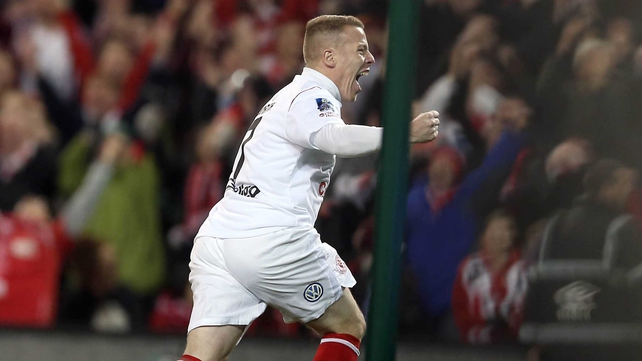 Davoren’s cross was drilled along the six-yard box but not one of the arriving Sligo contingent could get the vital touch as the Drogheda goal remained intact.

Ndo kept up the pressure on the Drogheda box, which led to two excellent set-piece chances that were wasted as Mick Cooke’s defence held firm.

The Drogheda goal was eventually breached in the 37th minute after Sligo captain Danny Ventre got in down the right flank before clipping a delightful ball back for the towering Elding who finished with aplomb.

But the official adjacent to Ventre in the right corner was already waving for a Drogheda goal-kick as she adjudged the ball had just drifted out of play before the Sligo midfielder got his foot on the ball. Replays were probably just siding with the assistant, so credit must be given for making the call, and making it early.

Sligo finished the half dominating possession with Djilali running at the Drogheda defence, while Elding’s aerial ability was also looking like it might reap dividends. But Drogheda were resolute and saw out the additional two minutes of injury time to take a well-deserved half-time lead.

The second half took less than 30 seconds to burst into life as Drogheda broke at pace with a four-man move taking the ball the length of the pitch before Cassidy was eventually intercepted by some last-ditch defending.

And so it continued, as the big pitch at the national stadium was fully utilised with both side steaming forward at every opportunity.

Eight minutes in, it was Sligo’s chance to move the ball the length of the pitch after a sublime Ndo flick and a perfectly weighted Djilali pass sent the Bit O’Red attack deep into Drogheda territory. But again, the Louthmen kept their shape and discipline to prevent any danger.

With 64 minutes on the clock, the Havelock Square end was treated to another goal, and once again, the effort was disallowed, this time to the disgust of the Drogheda support behind the goal.

A great ball was whipped to the back post and Gavin Brennan beat Alan Keane in the air to head home, although the referee adjudged Brennan to have eased the defender out of the way. A soft call but perhaps the correct one.

Drogheda almost secured the victory in the 72nd minute following a well-worked free on the left edge of the penalty area. Cassidy played the ball behind the bunched six-yard area and Ryan Brennan stepped back to guide the ball on target but the shot was cleared off the line.

The game changed following a double substitution. Danny North arrived into the fray to join the Sligo attack, while the Drogheda goal-scorer O’Conor, who had never stopped running all afternoon, had to depart after what looked like a cramp-like injury.

Sligo were building momentum with sustained pressure on the Drogheda goal and the equaliser duly arrived in the 78th minute.

A corner from the right was flicked on by Elding before it ricocheted off Prendergast before North arched his body to volley the ball into the roof of the net.

Drogheda almost hit back immediately from the re-start but Cassidy’s brave header from the edge of the box landed on the roof of the net with Rogers out of the picture following a punched clearance.

But Sligo were buoyed by the equalising goal and were piling forward at every opportunity. Full-back Keane raced forward and cut in from the right flank before getting cynically chopped down by Derek Prendergast.

And then came two moments of magic worthy of winning any cup final.

Firstly, Ndo crouching over the ball on the edge of the box, took a quick free-kick hoisting the ball just over the Drogheda wall. Then North was first to react and turned to catch his volley perfectly leaving Schlingermann with no chance as Sligo took the lead for the first time.

Amidst the celebrations, Drogheda captain Prendergast received his marching orders for remonstrating with the referee in relation to the free kick being taken before the whistle was blown."

Sligo thought it was game over but an injury to Gavin Peers also left the Bit O’Red with only ten men to see the game out. And then the referee handed Drogheda the added incentive of eight additional minutes to be played.

Drogheda were buoyed by the extra-time and levelled matters in the 92nd minute after a long ball was not dealt with by the Sligo defence.

Ryan Brennan ran in to guide the ball past Rogers to level matters and it looked like the game was set for another half an hour’s play.

But Sligo had other ideas and broke forward down the right flank as the always-impressive Djilali cut in from the corner and clipped the ball into the danger zone.

Man of the match North showed skill and composure to flick the ball with his chest into the path of Elding who turned and smashed the ball into the top corner in front of the travelling Sligo supporters.

It was a cruel blow to Mick Cooke’s Drogheda who could have put the game beyond Sligo reach before North’s arrival but credit the Bit O’Red and Baraclough’s belief in his attack-minded side as Sligo secured their third cup victory in four years to rule the Aviva once more. 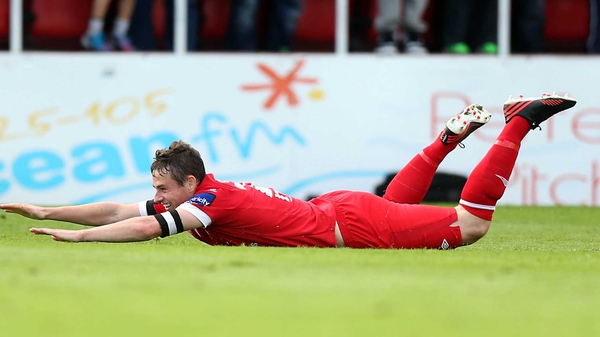