Hibernian boss Pat Fenlon has resigned from his Easter Road position - insisting the decision was "100 per cent" his own.

The Dubliner moved to Edinburgh to replace Colin Calderwood in November 2011 but his reign included last year's humiliating 5-1 Scottish Cup final defeat to city rivals Hearts as well as the record 7-0 Europa League setback to Malmo earlier this term.

The final straw for supporters came when they lost to the administration-hit Jambos for a second time this season on Wednesday, as they crashed out of the Scottish League Cup.

Speaking on the Hibs Twitter account, Fenlon said: "It is a difficult decision for me, but it is the right decision."

But the former Shelbourne and Bohemians manager insisted it was not pressure from supporters that forced his resignation.

He said: "It's a very difficult decision. I've been here a little while now and I love the place really. I have to be fair to everyone and it's the right decision to make at the right time.

"Wednesday wasn't [the reason behind why I have stepped down].

"I'm not being funny about this, I was more disappointed about Saturday [a 2-0 defeat to Aberdeen]. The players gave everything but we just didn't get the break of the ball on Wednesday.

"It's a culmination of three or four games that I wasn't happy with and now is the time to go.

"I'm convinced we have improved the football team. We have a real good squad and real good staff.

"I've been mulling the decision since Aberdeen and decided probably within the last 24 to 12 hours. I haven't told the players yet but I will speak to them in the morning.

"It will be difficult but the right thing to do.

"A lot of the negativity has been about me so I think it's right that I take myself out of the situation.

"The supporters’ feelings are always important to me but I have no problem with them. It's their club and we are in this together but this is the right decision."

Fenlon, 44, arrived in Scotland with an impressive track record in the League of Ireland, where he had racked up five league titles.

His first act as Hibs boss was to save the team from relegation but the heavy defeat to Hearts at Hampden saw him lucky to survive his first season in the capital.

Things improved last season as a second cup final appearance was booked after coming back from 3-0 down against Falkirk in the semi-finals. However, Celtic ran out comfortable 3-0 victors in the final while the team again missed out on the top six.

But worse was to come this term when they shipped nine goals in two games to Malmo in the Europa League qualifiers before twice losing out to their rivals from Tynecastle, even though Gary Locke's side had been ravaged by their own administration crisis.

And Fenlon admitted the 5-1 disaster at Hampden still haunts him.
He said: "My biggest regret was losing the Scottish Cup final to Hearts but I have no regrets about coming to the club. It was a privilege to manage this team."

In a statement released by the club, chairman Rod Petrie thanked Fenlon for his efforts, adding: "Pat arrived when were at a very low point almost two years ago and he has worked tirelessly to bring about improvements since his first day.

"He has taken us to two Scottish Cup finals in successive seasons and in his first full season in charge improved our league standing by 18 points and four places.

"He has assembled a squad of talented players but feels that he should now hand over the reins. We wish pat every success in future and thank him for all his efforts." 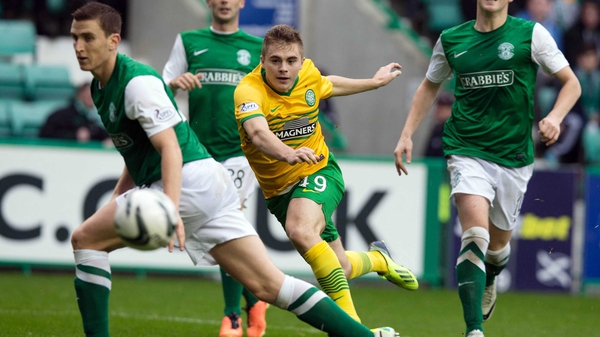