Cristiano Ronaldo scored a hat-trick and Gareth Bale hit two as Real Madrid struck seven goals past Sevilla in a remarkable game at the Bernabeu.

The Portuguese forward, fresh from his angry reaction to comments about him by FIFA president Sepp Blatter, took his fury out on the visitors, scoring twice in the second half after converting a penalty just after the half-hour mark in a 7-3 success.

The 2008 Ballon d'Or winner celebrated his first goal by giving the home crowd a military salute, perhaps in reference to Blatter's claim during a speech at Oxford University last Friday the player was like an on-field "commander".

Ronaldo was also backed by the Madrid faithful, who sang his name throughout the game, while fans behind the goal where he scored his second and third goals held up a banner saying: "Cristiano, the fans are with you."

Bale, who had a disappointing performance during the 2-1 defeat at Barcelona on the weekend and was subsequently mocked by the Catalan media, also produced a fine reaction, opening the scoring with a stunning curled effort and then doubling the lead from a free-kick, albeit with the help of a deflection.

Madrid appeared to be on their way to a comfortable victory after 32 minutes after Ronaldo's penalty made it three, but goals from Sevilla's Carlos Bacca and Ivan Rakitic set up an interesting second half.

Karim Benzema ended a two-month goal drought for Los Blancos by adding the fourth goal after the break and then had the last word by scoring the seventh.

In between times Ronaldo scored a further two, while Rakitic got another for the visitors, as well as missing a second penalty.
In the midst of the madness, Sevilla midfield Stephane Mbia was sent off for two bookings.

A crazy match got off to a frantic start.

The midfielder received a flicked pass from Bale which took him into the area and one-on-one with Sevilla goalkeeper Beto, but he pulled the shot just wide of the near post.

And Isco started the move which led to the opener.

He ran through the middle and gave the ball to Benzema on the left. The Frenchman turned a defender and then rolled the ball across the box to Bale, who took one touch with his left foot before whipping a shot into the top far corner to score his first goal at the Bernabeu. 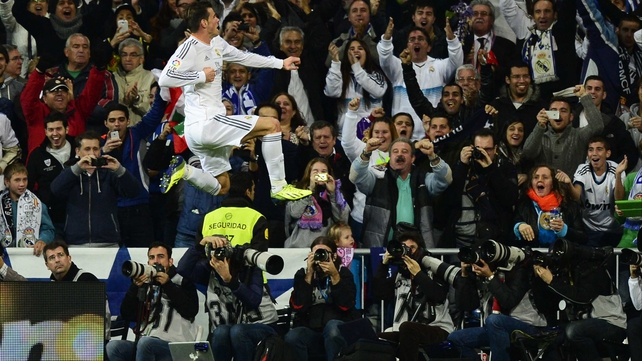 The Welshman doubled the lead from a free-kick, although the ball took a huge deflection off the arm of Spain left-back Alberto Moreno in the wall and ricocheted into the far corner, taking Beto completely by surprise.

Two soon became three. Isco went to ground under a challenge from Fernando Navarro and, although replays showed the offence occurred outside the area, referee Jose Antonio Teixeira Vitienes gave the penalty.

Ronaldo powered it past Beto to score his ninth goal of the season. The game appeared over as a contest, but Sevilla snatched a goal out of nothing.

Diogo Figueiras pursued a high ball with Marcelo and won the challenge to race towards goal. Sergio Ramos cut across him and gave him a light shove, which was enough for Teixera Vitienes, after some hesitation, to point to the spot.

Rakitic put the penalty away.

Sevilla got a second back almost immediately. Vitolo eased past Alvaro Arbeloa down the left hand side and gave the ball to Jairo, who pulled a pass across for Bacca to slide it in from a few yards out.

And 10 minutes into the second half, Sevilla squandered a glorious chance to complete their comeback.

Jairo was put clean through on goal after a smart interchange, but failed to get enough power on his shot and Diego Lopez saved it with his foot. The ball bounced back to Jairo, who then kicked it back into the goalkeeper's arms.

Lopez released the ball quickly and it fell to Ronaldo, who found Bale on the right hand side.

The Welshman accelerated then centred for Benzema, who took a touch before side-footing the ball into the bottom corner.

Bale was enjoying himself and again attacked at will down the right hand side, this time crossing for Ronaldo, who hit a first-time shot which Beto was unable to keep out.

The former Tottenham man had another burst down the right towards goal and went down after a challenge from Navarro, but nothing was given, to the astonishment of the home crowd.

Sevilla, lead by Diego Perotti, broke and the fell found its way to Rakitic, the Croatian curling a beautiful shot into the far corner to score the ninth goal of the game.

But Ronaldo got Madrid's sixth, and his third, in the 72nd minute to give the hosts a three-goal cushion once more.

Rakitic could then have completed a hat-trick too as Sevilla were awarded another penalty, the third of the night, when Figueiras was fouled by Ronaldo.

However, the midfielder sent the ball over the bar.

Yet there was still time for Mbia to see red in the 77th minute for a second booking and for a 10th goal.

Marcelo got to the byline and put in a high cross, which Benzema converted to score his second of the night and round off an incredible game.