FIFA president Sepp Blatter has apologised to Cristiano Ronaldo and Real Madrid after "light-hearted" comments he made about the player prompted a furious attack by the club.

Madrid president Florentino Perez branded Blatter's remarks "unacceptable" and even claimed they could influence the voting for the Ballon d'Or, with the Portugal international hoping to end Lionel Messi's domination of the award.

The Madrid forward and his club interpreted comments made by the FIFA chief in an address to the Oxford Union last week as a serious slight on the player.

Ronaldo appeared to feel Blatter was mocking him after being asked to compare him with Messi.

Blatter described Messi as a "good boy" before going on to say, in apparent reference to Ronaldo, that "one has more expenses for the hairdresser than the other".

The FIFA president then concluded by saying he preferred Messi.

In response Perez wrote a letter to Blatter, saying: "They (the comments) are unfair to a football player who has millions of fans around the world.

"They are disrespectful towards him...and finally we understand that your comments may influence the votes of those who have to decide on who should receive the award (Ballon d'Or)."

Perez said the club were "deeply disappointed" and described the comments as "unfortunate and unacceptable".

The letter asked for Blatter to retract his comments and the FIFA chief wrote back looking to diffuse the row.

He said in his eyes Ronaldo and Messi were "at the same level" and apologised for the "hurt" caused.

"It was never my intention to embarrass or disrespect to Real Madrid or one of their players or their fans," he added.

Ronaldo also had his say, posting on his official Facebook page, alongside a video clip of Blatter's comments: "This video shows clearly the respect and consideration that FIFA has for me, for my club and my country. Much is explained now.

"I wish Mr Blatter health and a long life, with the certainty that he will continue to witness, as he deserves, the successes of his favourite teams and players."

Blatter said sorry personally on his official Twitter account, saying: "Dear @Cristiano. I apologise if you were upset by my light-hearted answer at private event on Friday. I never meant to offend you."

"Dear @Cristiano. I apologise if you were upset by my light-hearted answer"

Blatter's original comments came during a question and answer session at Oxford University on Friday where he was asked about Messi and Ronaldo.

Blatter said Messi was "a good boy who every mother and father would like to have at home".

Then, when appearing to talk about Ronaldo, Blatter said: "The other one, this is something else. The other one is like a commander on the field of play".

He then stood up from his chair and walked across the podium in comic fashion.

Blatter added: "But this is the other side of football and that's good to have such commanders on the field also.

“Because you don't have the same attitude, and that gives life to football and one has more expenses for the hairdresser than the other, but that doesn't matter..."

Ronaldo and Messi were both on a 23-man shortlist for FIFA's Ballon d'Or award which was announced early on Tuesday.

Messi has won the award for the last four years, with Ronaldo finishing runner-up to the Argentinian the last two times. 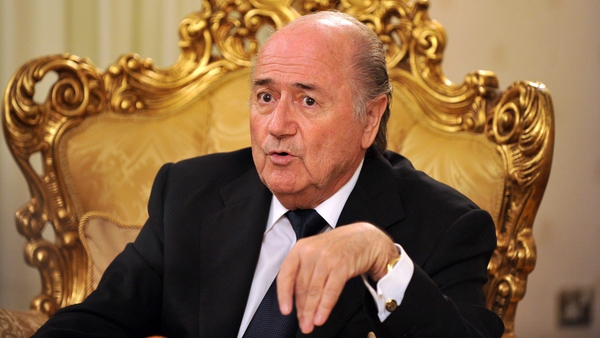