Barcelona and Atletico Madrid dropped their first points of the season on Saturday, missing the chance to equal the record for the best-ever La Liga start.

Champions Barca, who visit AC Milan in the Champions League on Tuesday, were held 0-0 at Osasuna. It was the first time they failed to score in a domestic league game in 65 matches since a 0-0 draw at Villarreal in January 2012.

Third-placed Real won 2-0 at home to Malaga, Carlo Ancelotti's side closing within three points of leaders Barca ahead of next week's 'Clasico' at the Nou Camp and two points shy of Atletico.

Real won thanks to a goal from Angel Di Maria and a stoppage-time Cristiano Ronaldo penalty, won by world record signing Gareth Bale who was a late substitute.

Barca were unable to breach a well-drilled Osasuna defence in Pamplona and Atletico were thwarted by an Espanyol side who have made a strong start to the season under Mexican coach Javier Aguirre.

The only goal of the game at Espanyol's Cornella-El Prat stadium in Barcelona came in the 54th minute when the ball deflected into the net off the outstretched leg of Atletico goalkeeper Thibaut Courtois. 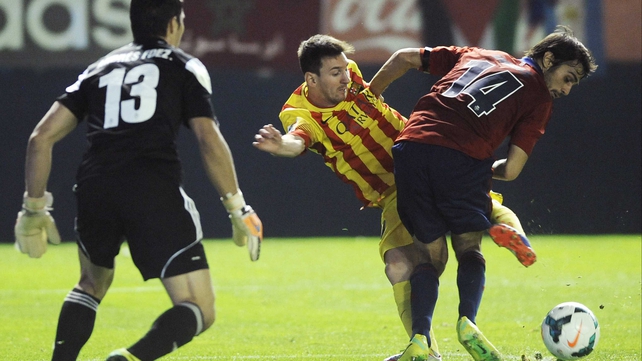 Argentine Lionel Messi, who had not played since the end of last month due to a thigh strain, came off the bench for the final 25 minutes of Barca's game but not even the World Player of the Year could conjure a goal for the champions.

"We knew it was going to be tough," said captain Carles Puyol after making his first appearance in almost eight months following knee surgery.

"It's always difficult playing at this stadium," the 35-year-old told Canal Plus.

"We were missing some effectiveness in the final pass but it's one more point. Now we have to recover from this and prepare well for Tuesday."

Barca dominated Osasuna, who sat back looking to catch the visitors on the break, and came closest to scoring midway through the second half when Neymar just failed to get on the end of a low Martin Montoya centre.

Cesc Fabregas had two golden chances but fluffed an attempted chip before sending a wild shot sailing over the crossbar.

Real meanwhile warmed up for Wednesday's Champions League game against Juventus with a victory.

It was hardly the sparkling display coach Ancelotti wanted to dispel doubts after some unconvincing performances this term but the Italian was happy about a general improvement from his expensive squad. 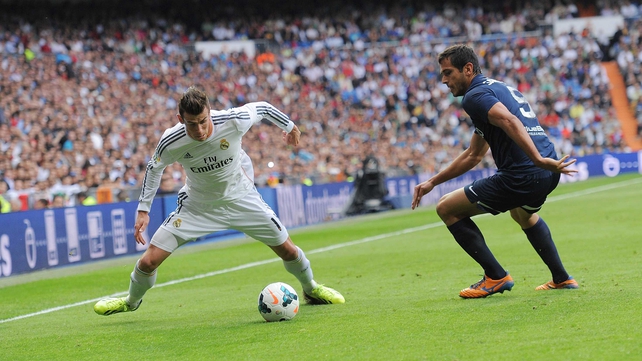 "Today I am pleased," Ancelotti said. "Everyone was focused on defending, we pressed well and recovered possession quickly.

"That was the difference compared to other matches - we did not give them chances and were well positioned.

"We have to keep it going and do things better but today the team performed well. We started the week on a positive note."

Ronaldo was comfortably Real's most dangerous player at the Bernabeu and the Portuguese forward curled a shot against the crossbar in the eighth minute against defensive Malaga.

The visitors did well to keep Real at bay until halftime but fell behind in the first minute after the break when Di Maria's whipped cross from the right evaded goalkeeper Willy Caballero's despairing dive before nestling in the back of the net.

Caballero was in inspired form and pulled off a brilliant stop to deny Ronaldo eight minutes from time and made another stunning save to palm away a low shot from substitute Jese two minutes later.

Real winger Bale, who has been out for several weeks with a thigh strain, came on for Alvaro Morata with 15 minutes left, suggesting he could play a part against Juve.

Bale won a penalty when the referee ruled he was fouled by Weligton in the area and Ronaldo dispatched the spot kick low to Caballero's right for his eighth league goal of the season.

Real Sociedad, who will chase a first victory in their third Champions League Group A outing at Manchester United on Wednesday, won for the first time since the opening day of the season as they beat Valencia 2-1.

Antoine Griezmann volleyed the visitors ahead in the 41st minute and Ruben Pardo added a long-range effort before Dorlan Pabon pulled a late goal back for Valencia as Sociedad climbed to ninth on 10 points. 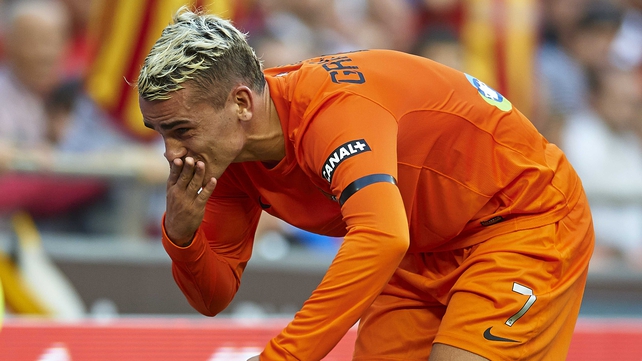 On Sunday, Sevilla let slip a two-goal lead to draw 2-2 at Valladolid and Real Betis lost 2-1 at home to promoted Elche.

Colombian Carlos Bacca struck in the second minute and Alberto Moreno's powerful left-foot drive on the half hour appeared to put Sevilla comfortably in charge.

But Valladolid's Manucho surprised Sevilla's goalkeeper in the 81st miunute as he leapt high to head into the back of the net.

Three minutes later Ebert snatched victory from Sevilla's grasp as he thumped a free kick into the top corner.

Sevilla climbed to 10th in the table with 10 points.  A victory would have ended a 17-year winless streak at the Pucela Stadium.

Earlier, Getafe won their fourth successive game, equalling their best ever winning streak in La Liga with a 2-0 victory at Granada.

The Andalusian side had Diakhate sent off just after the half-hour with this second yellow card, then Jeison Murillo's attempt at clearing the ball landed in his own net to open the scoring. Pedro Leon added the second goal in the 55th minute.

Getafe climbed to fifth position in the table with 16 points, one behind Villarreal.

Rayo Vallecano opened up space from the bottom of the table with a 1-0 triumph at winless Almeria.

The away side were more aggressive in the first period, led by Jonathan Viera, but could not convert their superiority into a goal.

Despite playing a man down after the expulsion of Saul Niguez in the 64thminute, Rayo's Alex Galvez whipped a free kick into the top right corner 14 minutes later to grab the three points.