Hull City and Aston Villa played out a 0-0 draw at the KC Stadium in a match where endeavour comfortably outstripped inspiration.

It is a result that should go down relatively well in both camps, with each side heading into the international break unbeaten in three Barclays Premier League matches and arguably ahead of their own schedules.

Despite that, neither side went in search of a draw and the chronic shortage of clear goalscoring opportunities can instead be put down to a lack of an X-factor in the final third.

For Villa, the formidable figure of Christian Benteke was a huge miss, while Hull were without four-goal top-scorer Robbie Brady (hernia) for the first time this season.

Gabriel Agbonlahor did his best to make up for Benteke's absence but missed a fine chance to score early in the second half after Andreas Weimann's cutback left him with an inviting shot.

That aside Weimann, whose pace should have been a big weapon against the 35-year-old Abdoulaye Faye, was well short of his best.

The Tigers, meanwhile, did not force Brad Guzan into a single save as Danny Graham's lengthy goal drought showed little sign of ending.

Hull gave an early indication that they were up for a contest, with full-blooded but fair sliding tackles from Stephen Quinn and Jake Livermore in the opening exchanges.

Sone Aluko even got involved, though he might be advised to stick to his attacking endeavours after being penalised for a mis-timed swipe at the impressive Fabian Delph.

Agbonlahor was also looking lively, using his pace to find gaps and sending a snap-shot wide from 20 yards.

Hull quickly decided the right wing was the their likeliest route to goal, with Ahmed Elmohamady the outlet. 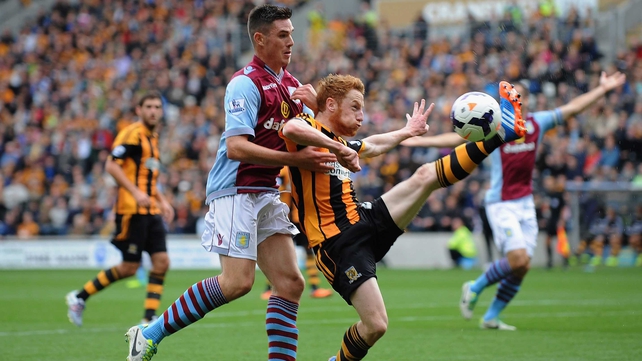 In the 15th minute the Egyptian linked with Aluko, whose deft reverse pass gave Graham the chance to cross for the advancing Quinn.

Graham picked the right ball but Leandro Bacuna did well the bundle it out for a corner.

Graham found himself on the end of similar cross from Elmohamady soon after, but he could not muster a clean connection from close range.

Indeed it was Hull's Allan McGregor who made the first save of the day, getting down well to claw a skiddy Agbonlahor effort wide.

The Scottish goalkeeper was less secure at his next attempt, fumbling a long ball into the home area and relying on Faye to clear.

Liam Rosenior was first into the referee's book but the second card of the afternoon could have been a red one for Ashley Westwood.

He was tussling with Tom Huddlestone on the halfway line when he appeared to thrust his arm towards his opponent's face.

Mark Clattenburg saw the incident but was content to caution Westwood.

While that energised the fans, neither side did much to threaten again before the break.

Immediately after the break Hull reverted to their earlier plan of allowing Elmohamady to attack Antonio Luna down the right.

He responded with a pair of teasing crosses toward Graham though both were dealt with by Ron Vlaar and Guzan.

It took 53 minutes for Weimann to impose himself on the game but when he finally put his pace to good use he turned a near lost cause into an effective cut-back for Agbonlahor.

The striker took a touch before pulling the trigger but missed the target by a yard at the far post.

A free-kick deep in Villa territory saw Aluko find Graham in the six-yard box but, as so often, his attempt to convert was not convincing and the danger passed.

With a little over 20 minutes to play, Steve Bruce replaced Aluko and Quinn with Yannick Sagbo and George Boyd.

Within seconds both new arrivals were involved in arguably Hull's best move yet.

Boyd released Maynor Figueroa on the overlap and when he whipped the ball towards the box, Sagbo dummied to leave Elmohamady with a shooting opportunity on the right-hand side of the area.

But the winger snatched somewhat at his effort and sprayed it wide.

Villa responded with a double change of their own, Aleksander Tonev and Jordan Bowery on for Westwood and Agbonlahor.

The closing minutes had a scrappy quality, with Hull seemingly the nervier of the two sides, but although they ended on the front foot Villa would have been fortunate winners. 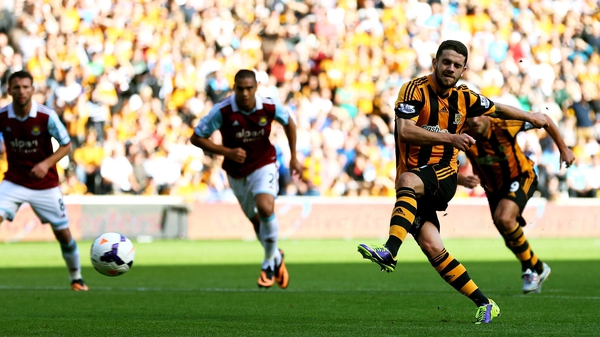