St Patrick’s Athletic maintained their charge towards the Airtricity League Premier Division title as they eased past UCD 3-1 at The UCD Bowl.

The Students took the lead in the 23rd minute thanks to a classy finish from Robbie Benson.

But St Pat’s hit back with two quick goals through Chris Forrester and Anto Flood, before Jake Kelly added a third early in the second half.

Liam Buckley’s side showed no signs of nerves in the opening exchanges as they close in on the league title, dominating the first 20 minutes, taking the game to the home side.

But despite their possession, St Pat’s failed to create anything of note with a weak Anto Flood header and an off-target John Russell volley the only threat to the UCD defence.

Then, with almost 23 minutes played, UCD silenced the large travelling support by grabbing the opener against the run of play.

The College midfield had looked solid against their esteemed opposition and their hard work paid off as Robbie Creevy got on the ball, looked up, and spotted his midfield partner in space.

The ball was played through the middle and Robbie Benson ran onto the pass before curling a composed left-footed effort past keeper Brendan Clarke.

With St Pat’s getting little joy in behind the College back four, the lively Chris Forrester chanced his arm from distance and his weak effort was parried over the line by McGinley, who had looked shaky from early on – the Inchicore roar returned, with just a hint of laughter.

UCD were rocked by the equaliser and two minutes later, found themselves trailing after a well-worked Saints goal.

This time it was a goal worthy of champions as, again, Forrester enjoyed space in the middle of the park and ran at the retreating defenders before rolling a sublime pass through to striker Flood.

The lone Saints frontman made no mistake, calmly slotting the ball past the advancing McGinley as the league leaders took a 2-1 lead into the half-time break.

A Jake Kelly strike from outside the box secured the points for Saints ten minutes into the second period.

Again keeper McGinley will be disappointed not to have saved the shot from distance, which flew beneath his body.

It was now a question of how many as St Pat’s attacked at will and Flood almost made it four after some excellent work by Kelly through the middle. This time McGinley saved.

A hopeful UCD ball into the box in the 75th minute caught the redundant Saints defence off guard as the ball hopped dangerously in the box following a Clarke flap.

But the alert keeper averted the danger as he made up for his half-clearance by smothering Benson’s shot, which might have made for an uncomfortable finish for the visitors.

Goal number four failed to arrive as the game petered out but the three points were all that mattered as the Inchicore outfit moved six points clear of Dundalk at the top of the table with just three games remaining.

Flares lit up the the Belfied venue as the visiting fans celebrated, but it may be champagne corks popping at Richmond Park on Sunday week as the champions-elect entertain outgoing holders Sligo. 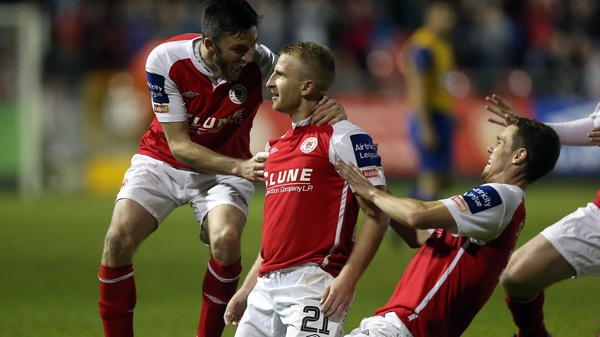