Manchester United slumped to their third Barclays Premier League defeat of the season as West Brom recorded a first win at Old Trafford since 1978.

Goals from Morgan Amalfitano and Saido Berahino either side of the interval proved enough for the delirious Baggies despite Wayne Rooney netting for the fifth time in as many games.

Not even the second-half introductions of Robin van Persie and Marouane Fellaini could swing the contest back in United's favour as they lost 2-1.

Fellaini did think he had equalised when he poked home Nani's low cross five minutes from time but the effort was ruled out for offside.

The result, at the start of what was supposed to be an easy run of fixtures, is a shattering blow to new manager David Moyes, whose team have now slipped six points off the pace in the early stages of the title race.

More importantly, United have now lost half their league matches and find themselves firmly in mid-table, with the faith the club's supporters vowed to have in their new manager already starting to fray judging by the boos that accompanied the final whistle.

There could hardly have been a greater contrast between the drab fare served up in the first-half and the 10-goal thriller between the sides that served as a fitting epitaph to Sir Alex Ferguson's managerial career in May.

Whereas the spectacular show at The Hawthorns had supporters on the edge of their seats, this soporific show had them slumped.

United were on top, as expected.

But their efforts were sporadic.

Rooney, who retained the captain's armband, had one header saved by Boaz Myhill and sent another soaring over the bar.

Shinji Kagawa's scheming presented a chance for Alex Buttner, but his scuffed shot was blocked.

The nearest United came was when Kagawa countered after some intelligent hold-up play from Javier Hernandez, cut inside Gareth McAuley, then picked out Anderson with an excellent cross.

It did seem an offside flag had been raised against the Brazilian.

If so, it was a bad decision. Not that it mattered in the end as the midfielder's diving header crashed back off the bar before he hooked a volley over.

Yet, for all their dominance of possession, United still lived dangerously at the other end.

Substitute Berahino flicked a header just wide from Amalfitano's cross. He then fired an effort straight at David de Gea in the last dregs of the opening period when really he should have done much better.

Moyes cannot have been that impressed as when his side re-appeared after the interval, Kagawa had been replaced by 18-year-old Adnan Januzaj

The teenager had no time to make an impact before the visitors seized the initiative.

Large question marks hung over the United defence as West Brom celebrated their goal though. For, after nicking possession in front of the dug-outs on halfway, Amalfitano was allowed to stride directly towards goal, brushing off a couple of half-hearted attempts to stop him.

Faced with only De Gea to beat, the Frenchman showed admirable composure, lifting his shot over the goalkeeper and in.

But before the Dutchman could be introduced, Rooney had levelled.

Yet again it was a free-kick. This time from about 25 yards, which the in-form England forward curled expertly home.

It was Rooney's fifth goal in as many games and with Van Persie ushered on a few minutes later, Old Trafford expected a routine end to proceedings.

The game did not pan out that way though.

Sensing their opponents are not the force of old, West Brom went hunting more.

And after a couple of close calls - including an Olsson header that hit the underside of the crossbar - they duly went ahead again as Amalfitano laid a superb pass into the path of Berahino, who found the bottom corner.

As Moyes had already introduced Fellaini, there was no more he could do other than hope for a change in fortune.

It did not arrive.

Rather than one of those stirring comebacks this ground had seen so many of, West Brom actually held their own.

Indeed, Stephane Sessegnon nearly made the damage even worse, only to slice his shot when glory beckoned. 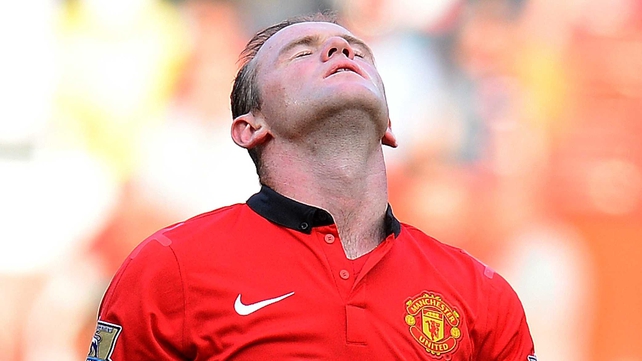 Fellaini had a goal ruled out for offside before Rooney's late free-kick was punched clear by Myhill and Januzaj flashed an injury-time effort wide.