Shamrock Rovers secured their second piece of silverware of the season as they beat Drogheda United 2-0 in the EA SPORTS Cup final at Tallaght Stadium.

After a sluggish start, Rovers broke the deadlock in the 11th minute as Gary McCabe converted a penalty after being taken down in the box.

Tommy Stewart’s strike in the 58th minute sealed the victory for the Hoops as both sides finished with ten men after Ken Oman and Derek Prendergast were sent off.

Mick Cooke’s side returned to the scene of their 7-1 mauling by the Hoops in this season’s Setanta Sports Cup final, but were, perhaps, thinking more of their 3-1 victory in the same fixture in last year’s EA SPORTS Cup final.

And Drogheda took the game to Rovers at this ‘neutral’ venue, dominating the opening stages of the decider.

The best chance of the early exchanges arrived in the seventh minute as Rovers were caught flat-footed by a quick counter attack.

Gavin Brennan found space on the left wing and burst forward before feeding Paul O’Conor who outpaced the retreating Rovers defenders. The United midfielder clipped the ball past the outrushing Barry Murphy but the ball hopped the wrong side of the post as Rovers were let off.

That chance kicked the Hoops into gear and Trevor Croly’s side took the lead three minutes later as McCabe fired home a penalty.

McCabe had burst into the box but was upended by the lunging Shane Grimes, leaving the referee with an easy decision to award the spot-kick. The Drogheda defender went to ground very easily allowing McCabe to basically fall over Grimes’ mistimed challenge. 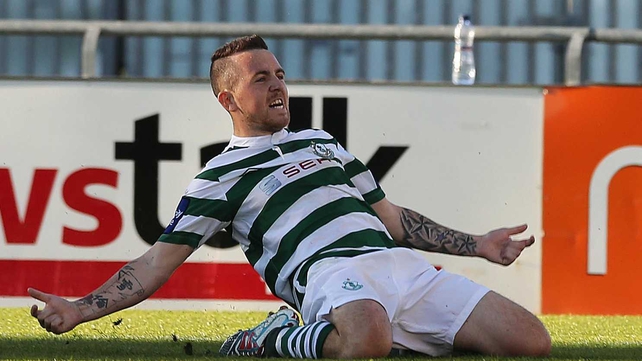 Drogheda did well to contain Rovers for the following ten minutes, as the Hoops appeared buoyed by the McCabe goal, before the game lost its intensity with both sides wasting lots of possession and creating little.

A wild Billy Dennehy strike that went high and wide was symptomatic of the lack of quality during the latter stages of the first half as Rovers took the slender lead into the break.

In similar vein to the first half, Drogheda were quickest out of the blocks and almost restored parity three minutes into the second period.

Again Drogheda attacked down the left and a superb ball beat everyone along the six-yard box. Mick Daly ran onto the ball at the back post as keeper Murphy came out to narrow the angle and the Hoops shot-stopper smothered the defender’s effort.

Rovers doubled their lead in the 58th minute after Tommy Stewart ran through following a mix-up as Drogheda played the ball out of defence.

The striker maintained his composure to calmly slot the ball home past the advancing Michael Slingerman. 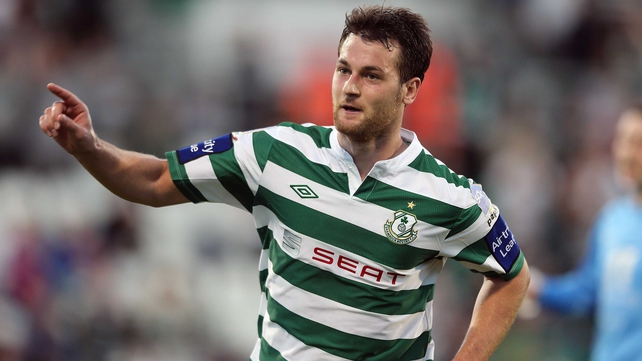 Drogheda kept up the fight but were restricted to half-chances due to a solid performance from the Rovers back four, the best being Declan O’Brien and Gavin Brennan headers than both failed to hit the target.

Mick Cooke’s side were given a lifeline in the 69th minute as Shamrock Rovers were reduced to ten men.

Ken Oman received his second booking of the night for a foul on O’Brien on the edge of the box. O’Brien certainly clipped the ball past the Rovers centre-half but contact appeared to be slight, if at all, as Oman protested his innocence.

The resulting free-kick from substitute Eric Foley was on target but easily stopped by Murphy to keep the two-goal advantage.

Drogheda centre-half Alan McNally was next into referee Padraig Sutton’s book for taking Stewart down with the Rovers striker through on goal, albeit, 35 yards out.

McNally stayed on the pitch receiving just a caution and perhaps the retreating Drogheda defenders may have prevented a goal-scoring opportunity.

Drogheda pushed on and started to find gaps in the Rovers defence as Murphy pulled off a superb save from O’Brien’s close-range effort, followed a minute later by another excellent save after a McNally half volley.

David Cassidy’s penalty appeal was waved away in the 84th minute as the former Rovers midfield raced through on goal. But the excellent Murphy got down low to push the ball out for a corner, taking a knock on the head for his bravery.

Drogheda’s best effort of the game came five mintues from time as an acrobatic Cassidy effort was remarkably cleared off the line by substitute David Elebert. 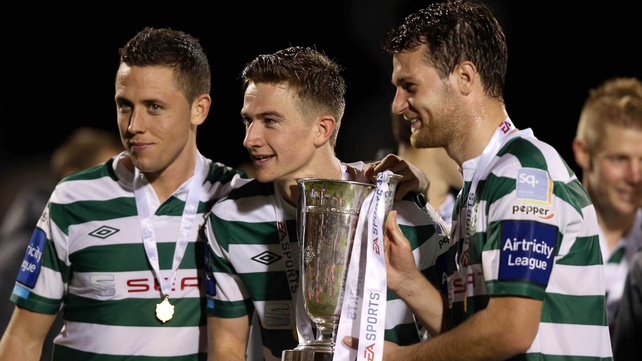 There was no way back for Drogheda a minute later as Derek Prendergast received his marching orders.

Sean O’Connor ran at pace at the Drogheda captain and went down as he went past Prendergast.

The referee was right on top of the action and while O’Connor appeared to go down very easily, the red card seemed to come for the vehement protest rather than the challenge.

Drogheda, to their credit, bombarded the Rovers box with continuous pressure for the remaining minutes but Murphy and the Rovers defence stood firm as the Hoops held on for victory.

Rovers substitute striker Eamon Zayed almost had the last word as he raced through before clipping the ball onto the Drogheda bar.

But it mattered little as the Hoops secured the cup victory for the first time since the 1976-77 season.