Sone Aluko stunned Newcastle with a stunning winner as Hull fought back to claim a famous 3-2 victory at St James' Park.

The Nigerian steered an inch-perfect 76th-minute volley past keeper Tim Krul for the winner after the Tigers had twice come from behind on Tyneside.

But Magpies boss Alan Pardew will have been furious with the way his side capitulated on a day when striker Loic Remy demonstrated his potency.

The Frenchman, the club's only senior summer addition, struck twice before the break to give his side the lead, much to the delight of watching owner Mike Ashley and director of football Joe Kinnear.

However, to the horror of the bulk of a crowd of 51,523, Newcastle endured a dreadful day at the back and were made to pay for their failings.

It took Remy just 11 minutes to get his name on the scoresheet, heading home from close range after strike-partner Papiss Cisse had dragged a shot across the face of goal.

But after a promising start by the Magpies, they allowed Hull to work their way back into the game and they were level within 15 minutes when Robbie Brady was gifted time and space inside the penalty area to beat Krul.

The home side were laboured in the efforts to restore their advantage, but they did so a minute before half-time when Remy pounced on a loose ball to beat goalkeeper Allan McGregor for a second time.

But Newcastle failed to learn their lesson and were punished once again with the second half just three minutes old when former Sunderland winger Ahmed Elmohamady ran unchecked on to Brady's free-kick to level. 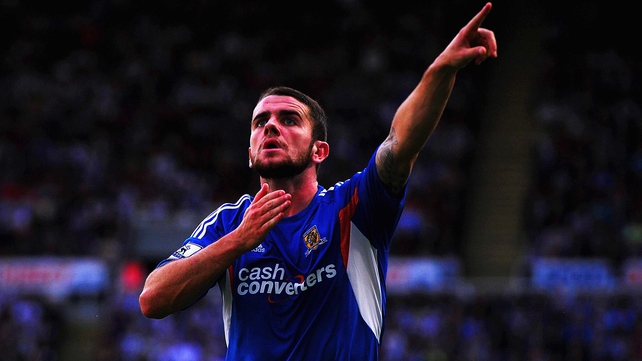 The home side flattered to deceive for long periods, dominating possession, but creating too little to make the pressure count as the Tigers defended deep to pave the way for Aluko's late strike.

Kinnear, who sat alongside Ashley, had defended his summer transfer dealings in his programme notes, citing "grossly over-inflated" fees and agents' demands for the lack of permanent signings.

He also expressed his delight with the one man he did manage to get through the door, and Remy repaid his faith in style in his first home start.

Newcastle came out of the blocks with genuine purpose and pinned the Tigers back deep inside their own half, and it took them just 11 minutes to get their noses in front.

Moussa Sissoko's cross from the right fell perfectly for Papiss Cisse beyond the far post and although he mishit his volley, the ball sat up nicely for Remy to plant a header past McGregor.

However, as Hull retreated behind the ball, they managed to stem the flow, largely frustrated man-of-the-moment Hatem Ben Arfa down the right and central frontman Cisse.

They might have been level when the home side failed to deal with a 17th-minute Tom Huddlestone corner, but defender Curtis Davies completely missed his kick, and Jake Livermore was denied by first Mapou Yanga-Mbiwa and then Fabricio Coloccini in quick succession.

Danny Graham, without a goal since January, passed up a glorious opportunity to end his drought when he headed straight at Krul from point-blank range with 26 minutes gone, but Hull were back on terms within seconds when the lively Aluko fed the ball into the path of Brady, who fired left-footed through Krul's legs.

For 10 minutes, Pardew's men found themselves on the back foot with the visitors sensing an opportunity.

However, they gradually re-established a momentum and regained the lead a minute before the break when Chester could only block Yohan Cabaye's shot to Remy, who gleefully stroked the rebound past McGregor.

But shambolic defending cost the home side dear within three minutes of the restart when Elmohamady was allowed to meet Brady's free-kick unopposed and saw his glancing header go in off the post.

Stung by the reverse, the Magpies launched an all-out assault on McGregor's goal, although to little effect.

Ben Arfa almost unlocked the door with a 64th-minute free-kick, but Cisse was unable to make contact in front of goal.

Another goalless afternoon for Cisse - he has now not scored in 11 games - ended with 17 minutes remaining when he was replaced by Sylvain Marveaux.