Richie Towell ensured that Dundalk’s season just gets better as he capped a dazzling display with a brace of goals to help sweep Shelbourne aside in this astonishingly one-sided FAI Ford Cup quarter-final tie as the Lilywhites won 5-1 at Tolka Park.

Andy Boyle, Patrick Hoban and Kurtis Byrne also scored to end the game as a contest before half-time as Dundalk made it eight wins on the spin as they reached the semi-finals of the cup for the second year running.

Having won the other four meetings between the sides this season, in-form Dundalk scarcely lacked confidence, evidenced by Towell’s attempted lob that was just off target on seven minutes.

And while Shelbourne had started brightly enough, forcing two early corners, it was Dundalk who carved the home side open a little too easily to score a fine lead goal after 13 minutes.

Hoban and Darren Meenan combined on the left for the latter to cross. Shelbourne failed to clear as the ball ran to Towell who worked a delightful one-two with John Dillon before curling the ball to the top corner from just inside the box despite keeper Niall Burdon getting a hand to the ball.

And as they had done in their league win at the same venue last month, Dundalk doubled their lead early on.

Meenan initially did superbly well to cut across from the left and force Burdon into a fine tip over save from a vicious 20-yard drive in the 18th minute.

From the resulting corner, taken by Meenan, central defender Andy Boyle arrived unattended to power a header to the net - just as he hadd done in last month’s league win.

Shelbourne needed a response and they twice came close to getting a goal back. Dean Kelly headed straight at Dundalk keeper Peter Cherrie from Lee Murtagh’s cross and the Shelbourne striker then sliced well wide from a good position from Sean Brennan’s lay-off after 27 minutes.

But it was a false dawn as Dundalk stretched their lead further in a lightning counter-attack in the 33rd minute.

Hoban sent the hugely impressive Towell straight through on goal from the halfway line. And though the ball was nicked off the midfielder’s toe, it ran kindly into the path of Hoban who confidently drilled it home.

Burden then prevented a fourth goal minutes later when turning a fierce shot from Meenan around the post.

But it was 4-0 after 44 minutes with Kurtis Byrne scoring from an audacious chip from the halfway line.

Towell added the fifth a minute later with a bullet header from John Sullivan’s right-wing cross before retiring at the interval having earlier shipped a knock in a clash with Burdon.

Shelbourne rallied from the resumption and got a goal back five minutes in when Murtagh ran clear to score from Brennan's through ball.

But it was a mere consolation as Dundalk saw the game out to book their place in this year's semi-finals.

Highlights and analysis of all the weekend’s Airtricity League action on MNS from 7pm on Monday 16 September on RTÉ Two and RTÉ.ie (Worldwide). 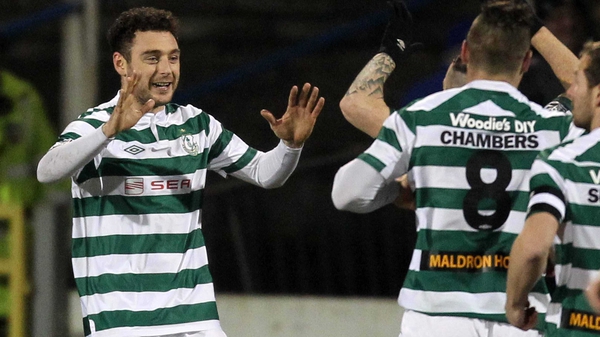