The Republic of Ireland’s World Cup qualifying hopes suffered a major setback as Sweden left Dublin with a 2-1 victory and a valuable three points on the road to Brazil 2014.

Captain Robbie Keane’s 60th international goal on 21 minutes was a reward for Ireland’s control of the early stages at Lansdowne Road.

However, Sweden got into their stride and Johan Elmander headed in an equaliser on 33 minutes to send the teams in level at the interval.

The visitors looked a danger breaking forward and veteran midfielder Anders Svensson celebrated his 143rd international cap by scoring what proved to be the winner early in the second half.

Caution replaced positivity in the home side’s play as the first half progressed and the visitors thrived on the space given to them.

Sweden and captain Zlatan Ibrahimovic are too good not to take advantage of the opportunities Ireland offered up after ceding the momentum. What had long been seen as a make or break game in the campaign has done exactly that. From the evidence of tonight, Ireland’s chances of securing a runners-up place in the group behind Germany look all but over.

Giovanni Trapattoni is unlikely to give up hope of qualifying, but all his efforts will now be focused on restoring confidence in the squad before they face Austria in another crucial qualifier in Vienna on Tuesday night.

Buoyed by a capacity crowd, Ireland had made an encouraging start. Shane Long’s shot was blocked by Martin Olsson inside the first 60 seconds and Glenn Whelan’s long-range effort tested Andreas Isaksson.

At the other end, Sweden’s talisman Ibrahimovic was left rueing a timely Marc Wilson block and a rare poor touch as he searched for the opening goal.

Ireland soon went back on the front foot and Isaksson was fortunate to see a James McClean cross skim the woodwork as it flew over his head.

Sweden’s defence, and Mikael Lustig in particular, looked shaky in the early stages and it was the Celtic full-back’s error that contributed to the opening goal.

A weak header back was seized on by Keane, who collided with Isaksson as his toe-poked shot bobbled towards the post. Keane picked himself up to smash in the rebound despite the efforts of Lustig and Mikael Antonsson on the line. Sweden stepped up their game several notches after the goal and began creating chances of their own.

David Forde held on to Elmander’s bouncing shot at the second attempt, before an unmarked Sebastian Larsson headed Ibrahimovic’s cross wide as the Irish defence appealed in vain for offside.

A deserved equaliser came just after the half hour mark. Lustig whipped a ball to the near post where Elmander’s movement had deceived Richard Dunne. The powerful header flashed past Forde.

Ireland’s defence was twice torn asunder by Ibrahimovic’s incisive through balls early in the second half.

The PSG striker picked out the onrushing Larsson as Ireland’s backline melted away. Forde raced from his goal and managed to nick the ball away from Larsson’s feet.

However, Ireland didn’t learn the lesson, as a minute later 37-year-old Svensson raced away from Whelan into space vacated by John O’Shea. The low shot was well struck, but Forde will be disappointed that it found its way past him at his near post.

Giovanni Trapattoni attempted to rejuvenate his team by introducing Simon Cox and debutant Anthony Pilkington in attack. It had little effect and Sweden easily saw out the remainder of the game.

For Trapattoni, the “show” is always more important than the result. Tonight there was neither.

A vocal home crowd had come expecting an Ireland win. Instead, it was the players and fans in yellow who were doing the singing long after the final whistle. 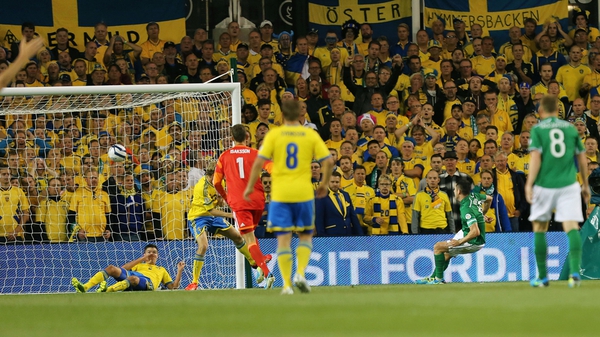 As it Happened: Ireland 1-2 Sweden