Republic of Ireland manager Giovanni Trapattoni faces two games over the next week that may very well define his time in charge of the international team.

Ireland take on Sweden (7.45pm live on RTÉ.ie, RTÉ Two and RTÉ 2fm) and Austria in the space of five days in two World Cup 2014 qualification games that will go a long way to deciding whether or not we’ll be heading to Brazil next summer.

It couldn’t be tighter in the race for a play-off spot and to finish behind run away Group C leaders Germany. Ireland, Sweden and Austria all sit on 11 points from six games played with three wins, two draws and one defeat apiece.

The Boys in Green have the slimmest goal difference of all three teams but two wins would go a long way to making that statistic a moot point. Conversely, so perilous is Ireland’s position that defeat to Sweden at the Aviva could all but rule out their chances of reaching the play-offs.

A scoreless draw against the Swedes in Stockholm in April so easily could have been a win, with Ireland getting the better of the exchange and managing to keep dangerman Zlatan Ibrahimovic on the periphery. Indeed, Shane Long may still look back on that game and rue several missed opportunities. 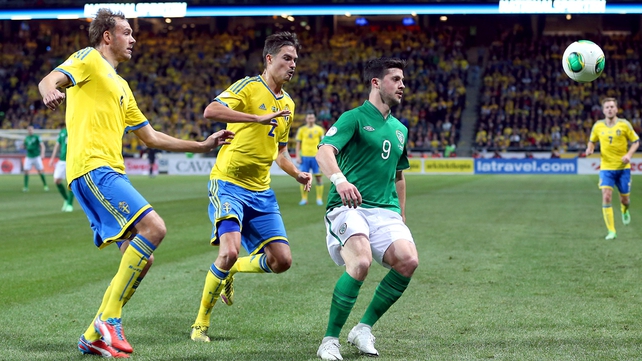 In Dublin things will be different, however, and Trapattoni’s Irish teams have always been better suited to playing away from home. His tactics of keeping things tight and trying to nick a goal from a set-piece or on the break has served us well and we remain unbeaten in competitive away games throughout his five-year reign.

When Ireland turn out in front of their own fans however, things can quickly fall apart. The 6-1 mauling at home to Germany remains fresh in the mind but they are one of the biggest teams in the world and of much bigger concern is the fact that under Trapattoni we have beaten just Cyprus, Armenia, Andorra, Georgia, Macedonia and the Faroe Islands at home in competitive games.

Those six teams couldn’t exactly be described as powerhouses and Sweden are a more threatening prospect. Trapattoni will have to hope he got both his selection and tactics spot on if Ireland are to take all three points and there are question marks over both of those aspects of his management right now.

Much to the relief of Irish supporters, the Irish boss has blooded new players and tried different things in the last few months, using lower key international games to give the likes of Wes Hoolahan and James McCarthy more game time.

The most recent friendly against Wales in Cardiff saw Hoolahan start and saw Ireland line up in a 4-5-1 formation.

However, the fact that neither Ireland or Wales performed in what was a dour game played a few days before the start of the new Premier League season looks to have handed the Irish management team the impetus to stick with the same old tried and tested formations and selections.

It was a daft time to play an international game and the lack of interest, both in the stands and on the pitch, where players were desperate to avoid injury and anything resembling a tackle made for an awful spectacle and poor Irish performance. 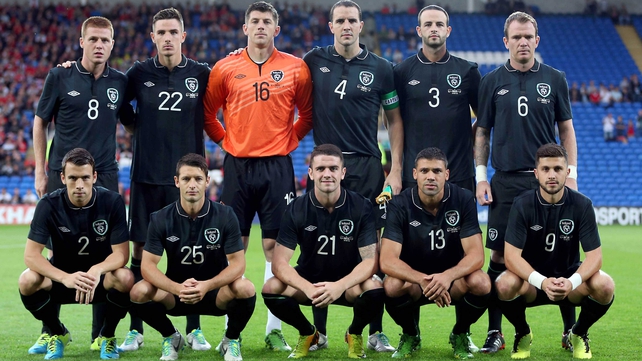 Trap’ had the perfect excuse to go back to his old favourites and even at the time the team was announced for the Wales game, the sense of relief that Hoolahan had finally got a chance was tinged by the fear that he was there as a sop to the fans and wouldn’t be considered for the qualifiers.

As expected when naming his team for Sweden on Thursday afternoon the manager reverted to type with a 4-4-2 formation with Robbie Keane up front.

Keane has been a great servant for Ireland down the years. He’s our top goal-scorer, has never been found lacking in either desire of commitment and decades from now will be remembered as one of our greats. However, his star is very much on the wane and his goal-scoring record against teams ranked above us in the FIFA rankings in recent times is suspect.

The LA Galaxy striker does fit into Trapattoni’s preferred set-up however and can link up well with the hard working and skilful Long. The good news is that Long and Keane will be playing in front of what appears to be an attack-minded midfield for once.

James McClean has been preferred to Simon Cox or Anthony Pilkington and as one of the few midfielders that we have who is willing to take on a player and get to the by-line, it’s a positive move.

He’s occasionally accused of being naive in possession by his critics and has a habit of running into blind alleys with the ball but with Long as a willing and obvious target man and Jonathan Walters coming in of the opposite wing, if McClean can get his crossing right, it may prove crucial for Ireland.

Likewise there’s room for encouragement in Trapattoni’s central midfield pairing. In the past he’s gone with two holding midfielders in an attempt to stifle and harass the opposing team with little regard for Irish creativity, but in the selection of James McCarthy alongside Glenn Whelan, the Italian tactician is gambling on Ireland as an attacking force.

It’s not exactly up there with Kevin Keegan’s kamikaze Newcastle team selections, but as far as Trap’ goes, it’s a bold move. 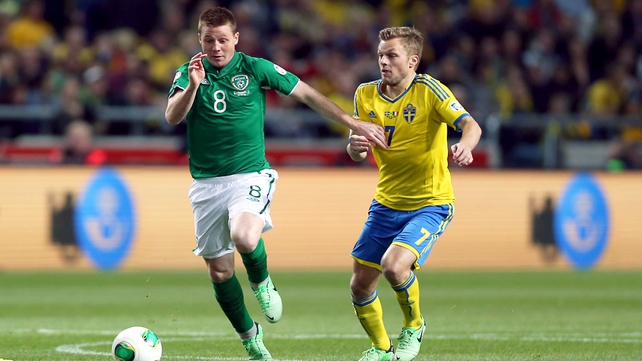 McCarthy, buoyed by his transfer deadline day move to Everton, should be bubbling for this game. With Whelan to sit in front of the back four and do the lion’s share of defensive duties, he will have more licence to get on the ball and get a bigger opportunity to push forward and join in the attack.

McCarthy is the most comfortable player on the ball that we have and has a knack of picking out willing runners in space. With McClean, Long and Keane ahead of him McCarthy’s precision passing could prove to be crucial.

The only remaining question mark in midfield is over the selection of Walters and although he’s not a natural winger, he has performed well out wide for Ireland in the past and is exactly the kind of hard working runner that the Irish manager so loves.

It’s in defence, however, where Trapattoni has taken his biggest gamble. The selection of Richard Dunne in the heart of the Irish defence has, for years, been taken as a given.

He’s the most reliable, consistent and resourceful centre-back we’ve seen in an Irish jersey since Paul McGrath and the performance he put in against Russia in Moscow to help us qualify for Euro 2012 is the stuff of legend. But he’s been out of action for over a year.

Dunne’s summer move from Aston Villa to QPR came after a nightmare season in which he didn’t feature at all for his club side.

He has since dropped down a division and come through several full games with his new side but it’s a big ask for him to go from playing against Exeter City forwards to lining out against Ibrahimovic.

Alongside John O’Shea in Stockholm, Ciaran Clark was able to marshal the Swedish frontman and his striking partner Tobias Hysen ably. Dunne is untested against quality opposition in a long time and we can only hope that the old magic is still there and he can invoke the spirit of Moscow one more time.

For all the talk about Ibrahimovic and the Swedes however, the visitors are not a team that Irish supporters should fear. They limped to a 2-0 victory over group whipping boys the Faroe Islands last time out and survived a few hairy moments at 1-0 until their talismanic striker bailed them out with a late penalty.

Ibrahimovic is of course a name that all will recognise and be wary of but all too often this campaign he’s been isolated up front as an ineffective midfield lacking in pace or creativity struggle to carve out chances for him.

It’s telling that even with the Paris St Germain striker in their side, the Swedes have scored fewer goals than Ireland, Austria and Germany in Group C. 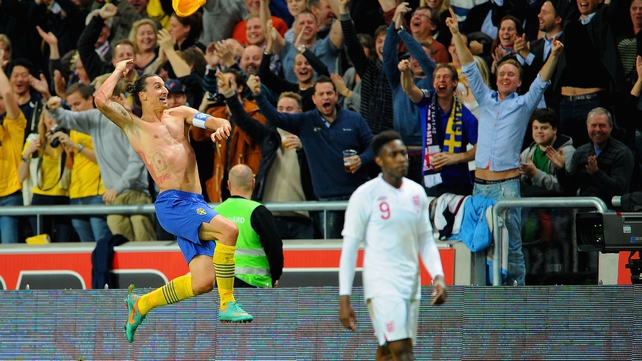 Sweden are set to line out in a similar 4-4-2 formation to Ireland with Ibrahimovic most likely to be partnered by new Norwich signing Johan Elmander, who is expected to replace the aforementioned Hysen who struggled to make any kind of impact in the 0-0.

Elmander will be expected to lead the line with Ibrahimovic tucking in behind and could offer a much more physical presence than Hysen and a bigger danger aerially, so O’Shea and Dunne will have to be alert to his threat.

This isn’t a great Swedish team by any stretch of the imagination and many of their best and most well known players are the wrong side of 30. The likes of Kim Kallstrom and Elmander may well have been names to fear in the past but there’s the feeling now that their best days are behind them.

The rest of the team is supplemented by younger and unproven players such as Fulham winger Alexander Kacaniklic.

Too many of Sweden’s younger players have yet to make a big mark on the club or international stage and there’s certainly no reason for Ireland to be overawed, especially when you consider the fact that Sweden are under just as much pressure as Ireland to take a result from this match.

Both teams have a remarkably similar run in, facing Kazakhstan, Germany and Austria in their final three games.

This is a game that both sides could draw and, assuming that Germany do them a favour and beat Austria in the Allianz Arena, remain in the hunt for the play-offs.

Defeat for either team would be a disaster so you have to give credit to Trapattoni for picking, what is by his standards at least, an attacking line-up. He appears to have selected a team to beat Sweden and this is a game that Ireland can win.

It may not be a classic – few big games involving Ireland ever are – but if the team sets out with the right attitude, gets support from midfield to Long quickly and helps to create space and time for McCarthy to pick out his passes then Ireland could have Sweden reeling early on. Long and McCarthy are going to be the key men for Ireland in this game and much will rest on how they perform.

We all know that the Irish players will do the dirty jobs well, as you can almost take it for granted that they be putting the Swedes under pressure and closing them down early on. However if they can get things right in the other half of the pitch from the start and most importantly give the supporters something to get behind, it could be a famous night.

Live television coverage of Republic of Ireland v Sweden from 19.00 on Friday 6 September on RTÉ Two and RTE.ie (RoI only). Live radio coverage with full commentary from 19:00 on RTÉ Game On on RTÉ 2fm and RTÉ.ie (Worldwide). 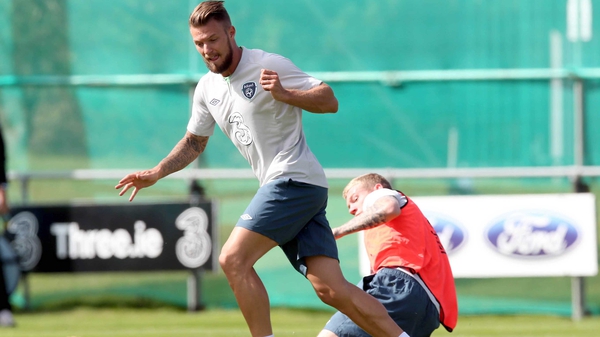 Anthony Pilkington: 'I was always committed to playing for Ireland'