Alvaro Negredo came off the bench to score for the second successive game as Manchester City edged to a 2-0 win at home to promoted Hull City in the Premier League.

With memories of last weekend's 3-2 defeat to another promoted outfit Cardiff City still fresh, City again looked edgy in defence and lacking inspiration in attack before Negredo found the net.

The Spaniard was brought on at halftime and 20 minutes later brought relief to the home fans inside the Etihad Stadium when he clinically headed home a Pablo Zabaleta cross from the right.

Yaya Toure added an undeserved gloss to the scoreline with a fantastic curling freekick from 20 metres in the 90th minute to give City six points from their opening three games, three more than Saturday's opponents.

Hull can take many positives from their resilient display, as well as another fine performance by goalkeeper Allan McGregor, but they will rue an early missed chance by Sone Aluko.

Pellegrini's defence had a more solid look about it with Matija Nastasic fit again to play alongside Joleon Lescott in place of makeshift centre-back Javi Garcia.

But the hosts were slow out of the blocks and Hull took advantage of their lethargy, frustrating the hosts with their determination to defend strongly and chase everything.

Joe Hart, under scrutiny for club and country after an indifferent start to the season, seemed uncertain as Hull made an early move into the box but Pablo Zabaleta cleared the danger.

Hull should have claimed the lead in the seventh minute when Graham's ball took a fortunate ricochet off Nastasic and sent Aluko clear. 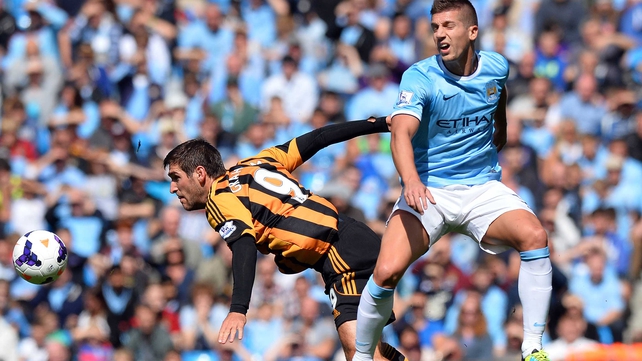 But the former Rangers striker squandered a glorious opportunity as he scuffed a low shot wide of the post after reaching the edge of the area unchallenged.

It sparked a lively passage of play and the in-form McGregor saved superbly at his near post from an Edin Dzeko header at a corner.

Hull had the ball in the net after 11 minutes when Graham slid to meet a superb Robbie Brady cross with a fine volley but the on-loan Sunderland striker was marginally offside.

McGregor was in action again moments later, tipping over a powerful Lescott header from a delicate David Silva cross.

Hull captain Robert Koren then drove narrowly wide after a free-kick was not properly cleared but the game then became rather scrappy.

Manchester City were unable to impose themselves and frustration among the fans was evident, even as early as the 30-minute mark.

Sergio Aguero weaved his way through the Hull defence with a typical jinking run but then lifted the ball into McGregor's arms.

Aguero was also unable to control a Silva pass and Dzeko had a cross bundled behind as the hosts' difficulties continued.

Pellegrini attempted to inject his side with fresh life at the start of the second half, sending on summer signing Negredo in place of Dzeko.

Yet it took Negredo some time to find his radar, with his first contribution being to head a long way wide from a Silva cross three minutes after coming on.

It was a while before the next chance materialised as Hull continued to battle and City struggled to piece together meaningful attacks.

They finally produced some quality to break the deadlock with a good attack down the right in the 64th minute.

Zabaleta got behind the defence and whipped an inviting cross for Negredo, who moved into space and leapt high to plant a firm header past McGregor. 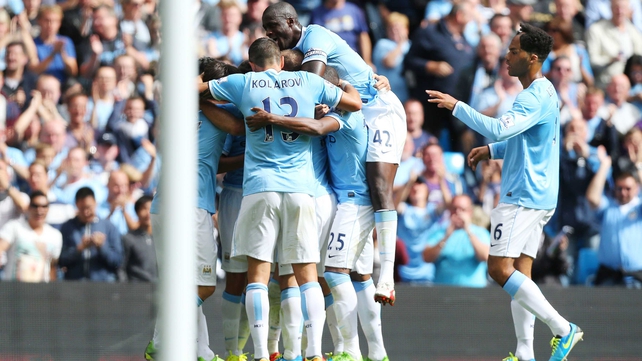 The goal appeared to do the job for the home side and they then played out until the final whistle.

They sat back and looked to strike on the break but they were again unable to muster much to worry Hull.

The visitors pressed until the end and they tried to have one last crack, but Hart punched a Tom Huddlestone free-kick away convincingly and then cleared an Ahmed Elmohamady cross.

And the points were safe in the final minute when substitute Samir Nasri was fouled on the edge of the box and Toure stepped up to curl in a superb free-kick, despite Elmohamady tracking back to the goal-line.