Juventus tonight confirmed the signing of striker Carlos Tevez from Manchester City on a three-year deal.

The 29-year-old has agreed a deal until 30 June, 2016, ending his seven-year stay in English football.

Details of the transfer fee have not been disclosed, but reports indicate the Turin club have paid an initial £10 million, rising to £12 million with add-ons.

"From now on, Carlos Tevez is a Juventus player" - Juventus statement

"From now on, Carlos Tevez is a Juventus player," read a statement on juventus.com.

Tevez met with Juventus officials this afternoon and was later pictured on the club's website holding the number 10 jersey made famous by iconic Juve striker Alessandro Del Piero.

The Juventus statement said Tevez had undergone the first stages of his medical today and would complete the examinations tomorrow ahead of his official presentation at Juventus Stadium, beginning at 10.30am UK time.

Although he has yet to officially start work, new City boss Manuel Pellegrini is known to have authorised the transfer, which could save the Blues up to £27 million, including bonuses, from the final year of Tevez's contract.

The move gives City more flexibility to operate in the transfer market, although it has been suggested Pellegrini is happy to offer Edin Dzeko a chance to stake a claim for a regular place.

There had been interest in Napoli's Edinson Cavani, although it is claimed City are not willing to meet the Italian club's £54 million valuation. 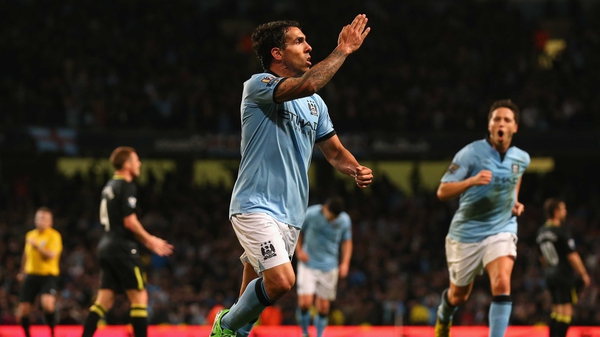