by Ed Leahy at the Aviva Stadium

The LA Galaxy striker opened the scoring after five minutes following some excellent build-up play by Wes Hoolahan and Aiden McGeady, before adding his second in the 55th minute, getting on the end of a Seamus Coleman cross.

And the third goal arrived nine minutes from time as Keane rounded off a fine man of the match performance with a neat finish following an exquisite pass from substitute Conor Sammon.

The Lansdowne Road arena was bathed in sunshine for this end-of-term encounter and there was a carnival atmosphere around the streets of Dublin 4, which continued into the stadium as Ireland captain Keane celebrated his record breaking international appearance.

The Lansdowne Road arena was bathed in sunshine for this end-of-term encounter and there was a carnival atmosphere around the streets of Dublin 4, which continued into the stadium as Ireland captain Keane celebrated his record breaking international appearance.

The pre-match banter included a, perhaps tongue in cheek, remark by Faroe boss Lars Olsen that they were here to spoil the Robbie Keane party.

But that was never going to happen as Ireland signalled their intent from the off and it took less than two minutes to threaten the visitors’ goal as Aiden MeGeady cut into the box from a short corner but dragged his effort wide.

The deadlock was broken in the fifth minute. And while the record books will show that it was Keane who scored, it was Wes Hoolahan, making his first competitive start for his country, who created it. 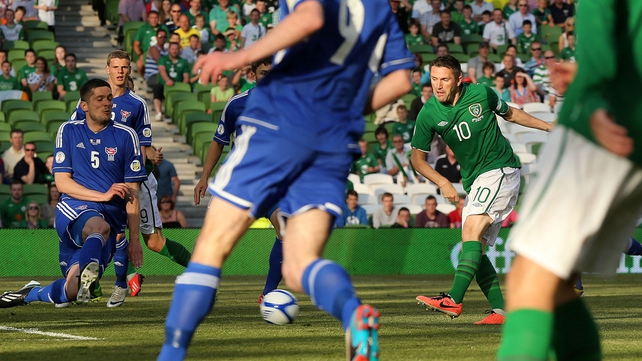 The Norwich City playmaker linked up well with Jonathan Walters in the middle of the park before taking the ball forward and rolling in McGeady down the left flank.

The former Celtic man had plenty of space and pulled the ball back to the advancing Keane who made no mistake with the finish, smashing the ball low to the keeper’s left and into the back of the net.

It looked like goal number two was about to arrive in the 12th minute after Keane played a deft through-ball for Walters but the Stoke City striker’s shot was well blocked by Jonhard Frederiksberg who was at full stretch to prevent a certain goal.

The one-way traffic continued and it looked like Ireland would put a big score on the board with McGeady causing mayhem down the left and several half-chances falling to the Irish attack.

A training ground free-kick nearly put Keane in for his second in the 26th minute and Walters almost capitalising on a poor back-pass less than sixty seconds later, but the Faroes goalkeeper was coping with the constant pressure.

And Gunnar Nielsen pulled off a superb save in the 34th minute to keep the deficit at one.

Again McGeady twisted and turned down the left flank. His cross was only half-cleared, falling to Keane ten yards from goal. Keane smashed his volley goalwards but a strong hand from Nielsen tipped the ball over for a corner.

As half-time approached, the Faroes finally made inroads into the Ireland half after a neat Simun Samuelsen nutmeg on Marc Wilson was followed up by a clever flick by Christian Holst on the edge of the box, but the support was lacking and Ireland cleared the momentary danger.

The visitors tried to take the game back into Ireland territory early in the second half and could easily have been awarded a penalty after Sean St Ledger appeared to push Holst in the box.

The home side heeded the warning and again took the game by the scruff of the neck, with McGeady running dangerously at the Faroe defence.

And the Moscow-based midfielder carved out a brilliant opportunity in the 48th minute as he lifted a cross right onto Hoolahan’s head on the six-yard box.

The diminutive Hoolahan, however, could not get above the ball to guide it home and instead watched his effort sail over the bar.

But just six minutes later it was the aforementioned Hoolahan who, once again, turned provider as Ireland doubled their lead. 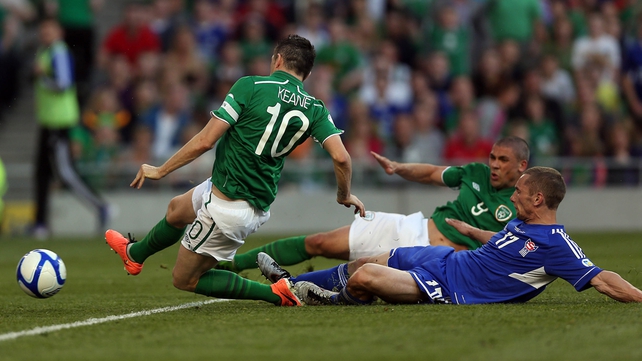 A clever first touch by the former Shelbourne man allowed him to burst through a gap just outside the box before rolling a great ball outside to the inrushing Coleman.

The Everton defended whipped a superb first-time ball across the six-yard box and while the arriving Walters failed to connect, the skipper was again on hand to steer the ball home at the back post.

The second goal failed to ignite the game and actually appeared to end it as a contest with both sides appearing to drop the intensity.

And that appeared to favour the visitors who almost shocked the Irish with a fine Atli Gregersen header just dipping the wrong side of the crossbar in the 77th minute.

James McClean and Conor Sammon were introduced in a Trapattoni-style shake-up and it bore fruit almost immediately as Ireland made it three in the 81st minute.

And sure enough it was the captain who completed his hat-trick on his special night, tapping home after some neat work from Sammon, who controlled a McClean cross before rolling it to Keane to finish. 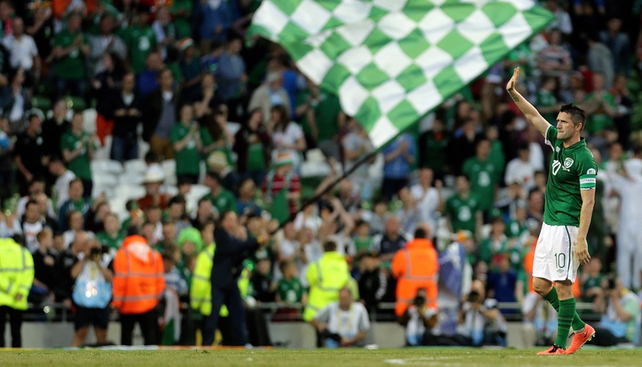 The floodgates eventually appeared to be opening as the Irish piled forward with St Ledger and Cox coming close within a minute of each other.

The skipper had one moment of magic left for the adoring home fans as he controlled on the edge of the box before lifting it over the keeper’s head and into the back of the net.

The offside flag kept the scoreline and Keane’s tally at three, with the referee appearing to apply special dispensation to the Irish captain keeping his yellow card in his pocket.

So Ireland sign off their competitive duties for the summer and will go into the autumn internationals full of confidence as they make their push for the World Cup playoffs.